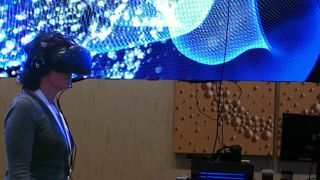 Long before “digital signage” was a mainstream moniker– and a big market– we pioneered the coverage of the nascent industry. After all, at NewBay Media we’d been covering AV everywhere– for the boardroom, the classroom, for the stage and live events, for sports arenas. Taking the screens and the displays out of those rooms and arenas and putting them into public spaces was a natural evolution for the industry, and for us. The rest is history, as now the digital signage market is so big and so pervasive that it’s often taken for granted. It’s part of the AV universe– and that’s a good thing.

What’s the new frontier, for AV? VR and AR are generating a lot of interest. And they will be the focus of a special event, Virtual Reality 2020 – to take place in New York City October 16th, and produced by NewBay Media, that is already drawing lots of buzz– as the best VR (virtual reality) and AR (Augmented Reality) minds from the world of content and broadcast meet with movers and shakers from other arenas including pro AV.

In a special VR demo/exhibit at SXSW Interactive, one of many VR demos at SXSW, Spatium: a VR trilogy inspired by Philip Treacy, a direct-view LED wall surrounded the viewer wearing the VR headset. A VR “journey” ensued, inspired by a famous hat by fashion designer Treacy.

At InfoComm 2017 in early June, the new Immersive Technologies Pavilion featured augmented reality, virtual reality, and mixed reality. According to InfoComm, “those these technologies are traditionally associated with entertainment and gaming, there's growing demand for commercial applications in education, government, manufacturing, and more.”