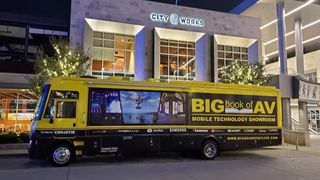 Since its original introduction in 2016, Stampede has taken its Mobile Technology Showroom (MTS) to locales across the country—assisting hundreds of resellers in presenting integrated technology solutions to their customers.

Kevin Kelly, Stampede president and CEO, said that hosting targeted demonstrations alongside local integrators helps to increase sales and drives home the message that Stampede is 100-percent dedicated to helping its customers succeed.

“Whether Stampede sales reps are meeting with educators in Houston or a partnering manufacturer wants to show off new products in a Boston suburb, the Stampede Mobile Technology Showroom is the perfect venue to bring high-tech experiences right to dealers and end users in local markets nationwide,” Kelly said. “It’s no secret that hands-on demos can greatly increase sell through rates and help land contracts. By bringing the demo to the customer instead of requiring them to travel, we remove all obstacles and doubts, which benefits our suppliers through greater product awareness and more sales.”

“Stampede is famous for its annual Big Book of AV Tour & Conference Series, but AV is only part of the product catalog we offer,” Kelly added. “In industries such as hospitality, the MTS is helping us show integrators that we are a true soup-to-nuts technology distributor, leading to month-to-month sales boosts of up to 200 percent after a visit. For integrators and our sponsor manufacturers, the benefits are clear.”

“The bottom line is that the Mobile Technology Showroom is a huge value-added tool for our sales team and the brands we carry,” Kelly concluded. “It’s an event space that’s also a mobile marketing machine, with logos on the outside, and it’s been a great success at every location so far. In one case, the personal experience provided by the MTS helped us sell a large-scale LED wall to an integrator who had been planning to purchase elsewhere from a different manufacturer.”

The Mobile Technology Showroom will be in Southern California from March 2-13, 2020, with additional dates being announced soon.