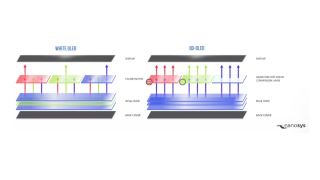 Samsung indicates in its press materials that it will roll out an $11 billion investment through 2025 to build “Q1 Line,” the world’s first quantum dot (QD) display mass production line at its Asan Campus in Chungnam, South Korea. The facility will be used to produce a new type of hybrid Quantum Dot-OLED display (QD-LED). These new displays combine a patterned Quantum Dot Color Conversion layer with a fluorescent blue OLED emitter.

The new line is scheduled to start production in 2021 with an initial 30,000 sheets (8.5 generations) and will produce a QD display of 65 inches or larger.

The company announced plans to switch the existing 8G LCD line into a QD line step by step and gradually expand production capacity by 2025. In addition, in order to accelerate the commercialization of new QD technology, the company plans to shift the existing LCD workforce to QD and hire new QD materials research and process development experts.