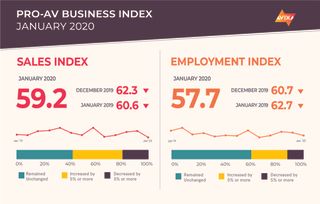 In January, pro AV sales growth slowed for the first time in five months, falling three points to 59.2, in AVIXA’s Pro-AV Business Index. This score was about one point down from this time last year. Many survey respondents suggested the new year means new money, but that wave often takes weeks to a full month to actually hit. For other respondents, it was new year, same challenge: finding and keeping skilled workers.

The finalization of the Brexit agreement was accompanied by another major positive trade development to start the decade: phase one of the new U.S.-China trade deal. This phase isn’t a sure end to trade uncertainty—it’s more of a ceasefire than a peace deal—but it’s a good start. It leaves in place most tariffs, but for the AV industry, the biggest impact of the trade war was always uncertainty more than prices. With the new agreement, AV buyers now have more confidence and will be more willing to invest in new projects.

“This pair of positive changes for trade has helped push recession probability lower than it was in late summer and early fall,” said Peter Hansen, economic analyst, AVIXA. “While chances are higher than they were for most of the 2010s, it’s still encouraging to see the chances trending in the right direction. Lower recession probability is always good for business investment—including in AV products.”

In pro AV headlines, AVI-SPL announced a blockbuster merger with Whitlock on Feb. 5. The merger, which is expected to finalize at the end of March of this year, creates the biggest AV integrator in the world. Late last year, AVIXA’s market intelligence team released its Macroeconomic Trends Analysis (META) report on the subject of market concentration and mergers in pro AV. The report found that the U.S. AV integration market is unconcentrated, meaning that no one or few companies dominate the space. Even after the merger, that finding remains true. The META report has a lot more detail on this critical topic, but a key conclusion to highlight here is that the data shows that the AV integration market has plenty of room for businesses both large and small.

The new decade started off with a strong U.S. jobs report. According to the U.S. Bureau of Labor Statistics, the economy added 225,000 jobs in January, well above expectations of 150,000. For pro AV, the news wasn’t quite as good. At 57.7, this month’s AV Employment Index signals that job growth continued, but at a slower rate than in December when the AVI-E was at 60.7.

“We’re always running short-handed. Current personnel could be better trained, more productive, conscientious of self-governing (take initiative). Overall crew is up to the tasks at hand and does complete assignments within timing guidelines,” shared an AV provider in North America.

The Pro-AV Business Index report is derived from a monthly survey of the AVIXA Insights Community, a research community of industry members that tracks business trends in commercial AV. The report actually comprises two diffusion indexes: the AV Sales Index (AVI-S) and the AV Employment Index (AVI-E). In each case, an index above 50 indicates an increase in sales or employment activity.