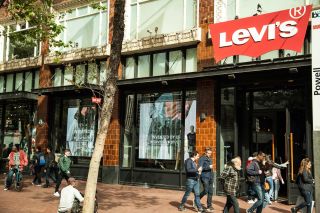 At Levi's flagship retail location on Market and 4th Street in San Francisco, the company's brand managers wanted to heighten the consumer engagement for the 8000-square foot retail space located in one of the world's most highly visited shopping areas. With two large windows looking out onto the busy street, Levi's worked with their longtime digital partner Reflect, who installed two FLEXClear transparent LED video displays from PixelFLEX.

“Levi's has been a client of ours for many years dating back to about 2013,” began Brandie Perkins, senior account manager, Reflect. “As a forerunner in the jean industry, they haven't always played a lot in the digital space, but for their San Francisco Market Street location, they really wanted to make a statement and connect with their customers. Having seen the possibilities of a transparent LED video display at a tradeshow, they asked us if we could implement the technology into their retail design, so we reached out to PixelFLEX about the FLEXClear LED video.”

As a 65-75% transparent LED display, FLEXClear gives designers the ability to offer a truly dynamic experience for consumers. Through its slim, attractive design and its high LED brightness, FLEXClear is perfect for any retail, hotel, shopping mall, or commercial application. With a 100,000-hour LED life and an IP44 rating, FLEXClear installation is quick and easy using spring-loaded Cam Locks for panel interlocking and offers easy back access for any service needs.

Perkins continued, “They wanted to install a big experience and attract consumer attention without impeding the natural light that comes into the store. With the way the store is physically laid out, the natural light is essential to the space, so they loved the idea of being able to put in a transparent LED display. This way they could still get light into the store without blocking any sightlines, and still make an impactful statement through the content on the screen.”

“As far as mounting goes, the design was quite ideal,” added Perkins. “After removing the old tracks lights which were used to light mannequins in the windows, we installed two separate FLEXClear LED video displays, one in each front window, that each included 30 total tiles. They are mounted to a rod hanging from the ceiling, and we are using our ReflectView CMS to push the content we create to the displays. We use a lot of videos and motion graphics, and take advantage of having an unlimited edge on the screens where we can simply display something like the Levi's logo, and then everywhere else the LED's are black allowing customers to see into the store.”

As the installation drew to a close, the FLEXClear LED system immediately began to draw attention. While capturing the focus of consumers passing by, the system went a bit further, capturing the attention of the other retailers who were curious to find out about the unique design solution.

“After we got the system up and running, Levi's informed us that other retailers on Market Street began commenting on the screen and were very interested in how the technology worked,” said Perkins. “At this year's Digital Signage Expo, we had the same experience where various retailers came to our booth to speak about the installation and the potential of FLEXClear LED. We are seeing a lot of excitement about its possibilities because it's a dynamic and impactful visual display that doesn't impede light or customer sightlines, all at an affordable price point.”