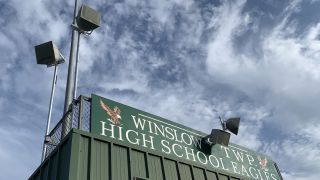 “We’ve been using Biamp’s Community loudspeakers almost exclusively for all athletic venue projects for 13 years,” said Joe DiSabatino of JD Sound & Video. “Both spaces needed high SPL and good low-end and the Community R SERIES with subs met those requirements. We were referred to Winslow High School by Eastern High School in Voorhees, NJ. Several years ago, we outfitted their gyms and stadium with various R SERIES products. After Winslow heard those systems we were brought in for their gym, and then the stadium this year. We designed and installed the systems using a combination of our experience with the loudspeakers, and EASE Focus acoustic modeling.”

The gymnasium is named after a former pupil, the world-famous wrestler Jordan Burroughs, who went on to become an Olympic gold medalist. Gym activities include basketball, volleyball, and cheerleading, as well as daily physical education classes, with some activities—such as line dancing—requiring music. Its substantial size can hold the entire school population, so it is also used for assemblies and pep rallies. The gym system utilizes eight Community R.5-94Z 12-inch two-way full-range horn loaded loudspeakers for the bleachers, flown four per side. Eight R.35-3896 8-inch ultra-compact triaxial three-way horn-loaded loudspeakers cover the floor area. The system is supplemented by two flown IS6-215 dual 15-inch subwoofers, which extend the bass and add low frequency impact.

“The gym system was installed in time for the school’s dedication ceremony and has been well received since,” DiSabatino said. “They had only two loudspeakers prior to our install, so it’s a night and day difference. They can have 1,200-plus students in there, and the music and voice are crisp and clear.”

The school’s stadium is used predominantly for football, with an athletics track running around the playing field perimeter. The audio system uses two Community R.5MAX 12-inch high output coaxial two-way loudspeakers and an R.35-3896 covering the home stands and track, while a single R.5MAX covers the field. An all-weather IS6-215WR subwoofer is mounted under the bleachers.

“They had their opening night at the stadium a few weeks ago with a DJ and full house,” DiSabatino said. “The ref wore a mic and everything was clear and the coverage was great. The big issue previously was being able to hear above the crowd noise and on the field, but that’s no longer a problem with the new system.”