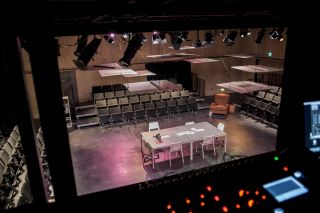 Bag & Baggage Productions (B&B) could write the book on flexibility. After all, the Hillsboro, OR-based theater company started touring the town in 2005 with nothing more than a van, mobile sets, and a handful of actors. By 2008, they had grown to become a popular fixture of the community and leased the historical converted Venetian Theater in the heart of the city’s Main Street. However, B&B required a new home when it was slated to be sold in 2016.

Nimble as ever, the company set its sights on its own permanent residence and found a 5,000-square-foot bank building just two blocks away. B&B aptly named the new home The Vault, as a nod to the building’s history as well as a signifier of the company’s permanence in the city and within the theater scene.

Unlike the Venetian—which was a large, 386-seat proscenium theater that was originally a movie theater—The Vault was built out as a small, black-box-style theater. This style is known for being simple. There’s no stage, just a flat floor and unadorned walls. Guests are situated around the four walls with the actors taking “the stage” in the middle of the floor. This change in setup was just one of the ways the company was reinventing itself.

“We had been at the Venetian for eight years, so we had gotten used to doing things a certain way,” said Jim Ricks-White, technical director for Bag & Baggage. “The Vault was a refreshing departure from that. When we started this process of looking for a new space, we started recalling our early years of operating out of a van. Everything had to be flexible. We wanted this space to reflect that humble beginning and not only function as theater but as a multipurpose event space that we could rent out to the community. To be that flexible, we had to be really selective of what technology we used and optimize the space for it.”

Technology has been the driving force for achieving that vision. Due to the size of the space, larger physical sets weren’t possible and something the company wanted to move away from anyway. Therefore, B&B decided to rely heavily on lighting and projection technology to set the scene, which, from a technology viewpoint, would make what was happening behind the scenes in the control booth just as important as what was happening on stage.

With that in mind, the executive team at B&B and Opsis Architecture created a facility that could host any kind of event, from corporate meetings to wedding receptions and film festivals, and specified technology that would allow them to carry that off. That included a BenQ 4K BlueCore laser projector, eight Mitsubishi projectors, a full JBL surround sound system with Lutron control, a Da-Lite projection screen, and a Crestron controlled digital lighting rig in the theater and in the control booth all manner of behind the scenes support such as a video camera and monitor to visualize the theater from the booth, an audio mixer, a wireless video distribution system, a patch bay panel, and a control system.

Because space was at a premium, B&B needed a rack that can handle many inputs while at the same time being incredibly accessible. Opsis Architecture selected Middle Atlantic Products SR Series Wall Mount Pivoting rack. Designed to address the need for space-saving solutions to house system distribution points, the SR Series’ innovative design allows the rack to be mounted on a wall and pivot open 90 degrees on a floor base to provide quick access to rear equipment connections without having to leaving room behind it. The rack also incorporates Middle Atlantic's built-in cable management and tool-free QuickMount system to integrate technology to best-practice standards.

“Having the ability to control and plug and play all of the technology to the show or event specifications has afforded us an incredible amount of freedom,” Ricks-White said. “Though we’re operating from a smaller space now compared to the Venetian, everything is right there in the rack—our camera input and monitor, all our HDMI connections, and our entire sound system. Access to the back of the rack has been incredibly useful in getting to our HDMI ports, which are in the back of the rack. For the first couple of shows, I was in the back of rack two or three times a show. Being able to swing open the rack and quickly plug into my next inputs was critical. It’s fast and simple.”

From a stage and technology management point of view, the consolidation of all that tech in one space has been a benefit for the crew, giving them something they didn’t have at the Venetian: better access and control of the technology. Previously, the sound booth and the lighting booth were in separate locations in the balcony. This required two operators for every show because if something went wrong in one place during a show, the other person couldn't get up and go fix it. Now everything is right where it’s needed.

“For example, if I suddenly lose signal on something at the mixer, I literally take three steps, look at the rack, and see if I'm getting signal at the switcher,” Ricks-White said. “There’s no digging around. It gives me three points that I can look at before I have to come down to the floor and figure out what's going on. It makes troubleshooting so much faster. It’s also key to our future as an organization. With everything we do, we keep asking ourselves how we, as a theater company, can move into the 22nd century. We will by staying flexible through technology and investing it in.”

To that end, The Vault was recently awarded a $50,000 technology grant to fund the purchase of the 4K projector. With the projector, the company has created a state-of-the-art digital projection laboratory that allows area artists, students, animators, innovators, and digital content producers to experiment with 4K technology. The projector also allows them to screen film festivals with 4K HD movies in the space as well as serve any presentation requirements for banquet, corporate, and event clients.

“We’re already doing 4K projection mapping for scenes, and we’re going to keep pushing the technology envelope and evolving,” Ricks-White said. “Our system will change down the road to naturally keep pace with what’s available. With a rack like this, we’re ready for that. It’s the brains of our operation.”