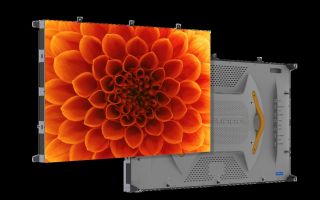 Leyard TWA Series
The pixel pitch of an LED display is the distance from the center of an LED cluster to the center of the next LED cluster, measured in millimeters. By breaking the 1-millimeter barrier, the 0.9mm Leyard TWA Series video wall display offers customers unparalleled resolution, with crystal clear viewing even at close-up distances of 10 feet (3 meters) or less. The Leyard TWA Series 0.9mm is ideal for conference rooms, control rooms or any application in which high quality, close-up viewing is needed.

“As the market leader in fine pitch LED displays, we continue to push the limits of what can be accomplished in this category,” said Steve Seminario, vice president of product marketing at Leyard. “The Leyard TWA Series 0.9mm addresses customer demand for using LED even at very close viewing distances, and accomplishes this goal with a highly efficient power design.”

The Leyard TWA Series is the first LED video wall solution to feature an “flat panel” design that includes a 16:9 form factor optimized for the most popular high resolution standards. Leyard TWA Series displays are self-contained units with standard HDMI inputs and looping, along with optional redundant configurations. The larger 54-inch cabinet means more of the video wall is factory-aligned, easing the time and cost of installation with fewer displays to align and seams to perfect. The larger units also mean that fewer displays are needed to create a video wall, reducing the potential points-of-service.