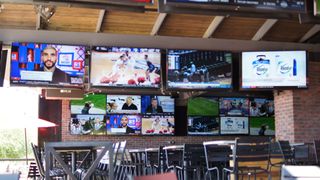 K O’Donnell’s sports bar and grill in Scottsdale, AZ has been a popular destination for sports fans since 2005. In 2013, the owner's daughter, Jennifer O'Donnell purchased the establishment and has since cemented the its standing as one of the best sports bars in the city.

Recently, K O’Donnell’s underwent an extensive renovation, complete with a new look, made from scratch food items, and specialty cocktails. As part of the makeover, O'Donnell wanted to take the experience of watching sports at the bar to a completely new level by packing the space with displays. This would ensure fans of any team or sport could watch their game, and that there wouldn’t be a bad seat in the house. To create this experience, she called on integrator RevampIT AV.

RevampIT AV brought the number of displays at K O’Donnell’s from a handful to a whopping 71, including a bank of 12 displays on the patio that is divided into two 2x3 video walls. Video sources at the bar include 13 DirecTV receivers, six DISH Network receivers in the off-track betting (OTB) room dedicated to horse racing, one Cox cable set-top box, and a PC. When it came to video distribution, O'Donnell wanted to provide K O’Donnell’s managers with the ability to send any source—including the receivers in the OTB room—to any display in the bar with ease.

Future expansion of the system with additional displays and sources also needed to be simple and cost-effective. And finally, reliable operation was critical. Unfortunately, the existing video over coax system at K O’Donnell’s didn’t meet any of these requirements. A new solution was needed, and RevampIT AV turned to BlackWire Designs and Just Add Power (J+P) to provide it.

“With so many displays and sources at K O’Donnell’s, we didn’t trust any solution other than J+P’s 3G Ultra HD over IP platform to deliver the reliability and scalability required, as it has in so many other installations for us,” said Jack Thompson, owner of RevampIT AV. “We purchased the system from BlackWire Designs, which is known for providing exceptional technical support when other distributors don’t, including after business hours and during weekends. Since K O’Donnell’s was open as usual for the duration of the project—and we were doing our work at night after close—this off-peak support proved to be essential to the installation’s success.”

K O’Donnell’s J+P system offers ultra-low 16 ms of latency from source to screen and supports 4K Ultra HD resolutions and HDMI 2.0 devices with HDCP 2.2. The platform enables seamless switching between any resolution HDMI source as well as uncompressed lossless multichannel audio formats, including Dolby Atmos support. Video wall functionality is built-in for displays installed in portrait and flipped configurations, as well as image push, pull, and pop features. An integrated scaler on the receiver automatically adjusts the picture to fit the screen.

Each of K O’Donnell’s displays is equipped with a J+P VBS-HDIP-508POE 3G receiver, while sources are connected to a combination of VBS-HDIP-707POE 3G and VBS-HDIP-718AVP 3G+ A/V Pro transmitters. To save RevampIT AV time, BlackWire Designs performed system configuration on the J+P units before they were shipped.

The Ultra HD over IP platform is engineered to provide complete scalability, so expanding the system with an additional screen or source is as simple as adding another receiver or transmitter. In the near future, O'Donnell plans on adding a J+P wall plate transmitter as an HDMI input, allowing groups renting out part of the bar to use their laptops as video sources. In addition, a digital media player will soon be added as another source.

The J+P system is supported by two Luxul XMS-7048P 52-port stackable PoE+ managed switches—with a Ubiquiti UniFi 48-port switch powering the main network—and control is provided by URC’s Total Control platform. Managers interact with the bar’s audio and video systems using a single 7-inch wireless tabletop touchscreen. To change the source on a display, they simply select a video zone, TV number, and the desired source. They can also change the audio source by zone and adjust the volume.

For the patio video walls, the touchscreen allows them to display a single source on four of the six displays in each. To simplify opening and closing of the bar, all displays can be powered on or off with a single button press. When turned off, each display defaults to a predetermined video source for the next day’s opening.

“Jennifer is thrilled with the new set-up at K O’Donnell’s, and so are her customers,” added Thompson. “The bar’s managers love how easy the system is to operate. Many have used other systems in the past, and none have met their expectations. But with the Just Add Power platform and the URC control system, it couldn’t be easier to quickly change sources on displays. This enhances the customer experience and frees managers up for other tasks. And the system has performed reliably, day in and day out, making sure the big game is always on for fans.”