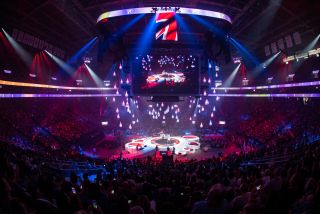 Previous iterations of the Young Living event relied on projection mapping with LED accents to bring an arena stage to life. In 2018, its production company ditched the projectors in favor of a custom, visually stunning and all-LED buildout.

A worldwide marketer of life-changing products infused with the benefits of essential oils, Young Living in 2018 brought together more than 30,000 passionate members from around the world for what has become its annual high-energy and dynamic celebration filled with inspirational speakers and live entertainment.

Needing a show foundation that could deliver a one-of-a-kind attendee experience, Young Living’s events team once again collaborated with the design specialists at Cornerstone Technologies, who created a custom LED stage floor, with video supplied by Elite Multimedia Productions.

“We’ve worked with Young Living on their International Conference for the last 10 years consecutively and we have been involved with their organization for almost 13 years in total,” said Chad Fraughton, Cornerstone co-founder and executive producer for the Young Living event. “In years prior at [Salt Lake City’s] Vivint Smart Home Arena, we had always relied on projection mapping for the stage with LED video elements complementing the design. This year, rather than do a hybrid of image mapping and LED, we wanted to develop a completely custom and cutting-edge design worthy of the production.”

Knowing they wanted to take the event design in a new direction for the 2018 convention, Fraughton and the team at Cornerstone began to conceptualize how this could be done. In a production with a multitude of different video elements, providing a unique system to display crisp and clear imagery was a high priority.

“We really wanted to start the design with strong imagery on the stage floor so that attendees could have a more intimate feeling in the arena setting and be more connected to the media and the presenters,” continued Fraughton. “The idea for the LED video floor started around some of the more hybrid designs that we had done in years past, and with just under 3,000 unique video looks in the show, we needed strong visual content that would allow the messaging to drive the design.”

With the idea of placing LED video directly onto the stage floor now moving forward, the physical layout of the video surfaces needed to be finalized. Remaining dedicated to providing a design that was truly one-of-a-kind, Cornerstone developed a series of circular video surfaces which would be placed across the stage.

“The main stage was comprised of a 50-foot LED video circle and then the surrounding areas included 30-foot, 20-foot, 15-foot, and 10-foot video circles as well,” explained Fraughton. “To do this, we created circular stages that provided the foundation and once we had the foundation in place, our scenic department built square frames used to attach the LED video panels. We then we did a white marley cut-out that masked each of the video areas, which allowed us to illuminate the stage from above.”

When it came time to actually install the design, Cornerstone knew that a smooth and efficient load-in would be crucial to the event’s success. With time not on its side, the team at Cornerstone took a bit of inspiration from the concert touring industry so that it could quickly install and begin programming for the show.

“We basically had 72 hours to load-in, tech the design, and be ready for show,” said Fraughton. “It was pretty fast and furious, so we had a lot of our systems built around the idea of a touring design and ready to be a plug-and-play solution. Creatively, we treated the design mask as one giant image and then programmed the circular images within the mask. With the aggressive nature of the content we were trying to display, this really gave us a greater ability to manage the time and resources to be more effective with what we were looking to deliver.”

It was imperative for all of the technical solutions Cornerstone employed to work in concert for a cohesive result. With the video being placed directly on the stage floor, the performance of the LED panels provided by Elite Multimedia Productions were put to the test.

“LED video was definitely the right choice for this application as it was able to stand up to the 125 3000K moving lights that we had flown in the rig,” added Fraughton. “Being in an arena setting also meant there was also a lot of ambient light. The power of the FLEXLite Plus provided the ability to place the video elements into the stage floor and still give us the visual impact we originally envisioned.”

As the 2018 Young Living International Convention kicked off with a split general session for approximately 30,000 attendees, Fraughton was eager to gauge the audience response to the LED stage design. Knowing the amount of work it took from everyone involved on the project, he was happy to hear the glowing responses from both attendees and technicians.

“The comments that were most overwhelming from the attendees and the technical support staff were that this was one of the most elegant stage designs they’d ever seen,” concluded Fraughton. “It was beautiful and polished, and almost looked like it was on an acrylic extrusion with beautiful lines. When you look at big shows like this, and you understand the dynamic of what all is involved, having reliable products and technicians like those at Elite Multimedia Productions is critical to the demands of the show, and the final product was truly beautiful and refined.”