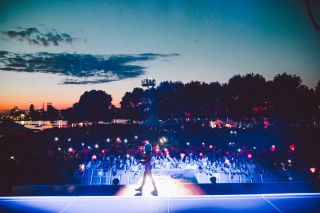 Halsey's "Hopeless Fountain Kingdom World Tour," in support of her second studio album of the same name, began last fall and will conclude this September. It is her second headlining concert tour.

Production Designers Sooner Routhier and Robert Long of S Rae Productions designed the show, which makes extensive use of LED video. Large stairs have LED video on the risers, and a large LED wall upstage is comprised of two screens split at the center. Above the stage are five straight trusses with lighting, which mimic the stairs giving a very linear look to the overall design. Craig Rutherford is the lighting director.

DCR Nashville has supplied the tour with 14 Claypaky Mythos 2 fixtures and 32 Scenius moving head spots. "The lights have been popular items in our inventory for some time and have also toured most recently with Brantley Gilbert and Chase Rice," said General Manager John Schirmer. "The Mythos 2 are rock solid, and Scenius always does a great job; everything has been fantastic on Halsey's tour."

Jennifer Moore, DCR Nashville's VP of sales and the account executive for Halsey said, "At DCR we are about developing relationships through inspired solutions and experience. With Halsey we get to call on each of those components to provide our client with a show that her audience will remember for quite a while. Claypaky fixtures play a big part in that equation."

Ten of the Mythos 2 are active fixtures mounted in the upstage truss, which rises above the LED stairs. A dozen Scenius spots are on the downstage truss and a dozen on the midstage truss. All of these lights provide SFX and beam lighting for the show.

Two Scenius are offstage left and right in truss chairs with specially fabricated handles, and two more are positioned at FOH with the same custom handles. These four serve as traditional spots.

A grandMA2 light is used for opening acts and as a spare system for Halsey. A grandMA2 full-size console with six NPUs controls lighting and the LED stairs. "We have a lot of multi-channel fixtures plus the LEDs on the stair rises so we needed the NPUs," said Schirmer. "We also have two grandMA network switches to manage the amount of data being passed between MA-Net and Art-Net to control the whole system."

DCR also furnishes two MDG ATMe haze generators for the tour. "I love them, they're great units," said Schirmer. "Atmosphere is generated during the entirety of the show."