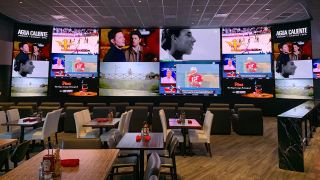 Owned by the Agua Caliente Band of Cahuilla Indians, the casino resort and spa opened in 2001. It expanded with $400 million of new construction in 2008 and added 360 Sports late last year. Sports betting is not yet legal in California so 360 Sports debuted as a sports bar and restaurant with a variety of real-time programming and custom video options for its patrons.

“The client wanted something unique that would rival any Las Vegas sportsbook,” said Art Martinez, who is partnered with Vince Ovist in Advanced LED Displays. “We suggested that they be the first sports bar in the nation without numerous independent TVs, which you commonly see throughout these venues. Instead, every image—big or small—would be part of large LED video walls. The space would look a lot cleaner and more contemporary. The client loved the idea, and we went to work with the architect.”

360 Sports boasts 2,300 square feet of LED displays comprising a main LED wall, an LED bar back, a “Dogbone” LED wall and an entry LED wall, which surround table and bar seating. The video walls are fed by 19 DirecTV boxes for sports programming and 12 proprietary media players for Agua Caliente’s own media and marketing content.

A Christie Spyder X80 drives the main LED wall, bar back, and Dogbone LED walls; a Spyder X20 drives the entry and the separate Center Bar video walls, which has an elliptical LED wall wrapped around its bar. The Spyders link to 4K LED controllers that feed the displays.

“I’ve used Spyder X20s many times over the years,” Martinez said. “But 360 Sports marked my first time using the X80, which is a pretty awesome piece of equipment. With so much LED in one space, it all came down to layers: Most processors can’t handle 24 different layers at one time, but the X80 can scale images, move them around and layer them in ways other processors can’t. Other systems don’t even come close to having the Spyder X80’s capabilities.”

Another major factor in choosing the X80 was its HDCP 2.2 compliance, which is required to process encrypted programming content. “Very few processors offer this, and we need compliance for the DirecTV boxes,” Martinez said. “Thanks to the X80’s 4K capabilities we’re also future proofed when DirecTV switches to 4K content.”

A simple user interface makes it easy for bartenders and managers to leverage Spyder’s API for command and control. Accessing presets to change the looks on all the LED displays is achieved with just a button push.

“They love the touchpanel interface and their ability to show off different looks from putting a single game up on a giant screen to highlighting an array of sporting events,” Martinez said. “On some nights they bring in a DJ who can plug into two different locations and take over any or all of the screens with custom video at the press of a button.”

“360 Sports and the Center Bar are very successful Spyder applications, and it’s been a real pleasure working with Art and Vince on the project,” said Joel Turensky, Christie’s content management and processing sales director – Americas. “We’re proud to have established a very good partnership with them.”

According to Martinez, 360 Sports has quickly established itself as a popular spot at Agua Caliente. It packed in guests for Super Bowl LIII. “As the property continues to evolve, the inevitable goal will be for 360 Sports to be ready to go as a sportsbook when sports betting is legalized in California,” he said.