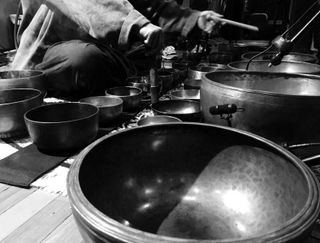 Singing bowls are ancient instruments that have long been used in Buddhist religious ceremonies to accompany periods of meditation and chanting. They have become popular with music therapists, sound healers, and yoga practitioners who use their steady and harmonious sound to create a sense of calm and relaxation.

“To capture the sound and full frequency range of the bowls, it was crucial to choose the right microphone early on in the process, at concept stage,” Chan said. “We decided to go with d:vote 4099 Instrument Microphones because they could deliver the results we wanted. We mounted them in the correct location and they perfectly captured a balanced mix of the high and low frequencies.”

Tsang’s new album, The Seed of Sound, draws on his years of experience with singing bowls, which he plays and also teaches others to play. For this project,Chan was given an additional test because Tsang wanted the album recorded live.

“This is not the first time I have recorded with singing bowls, but it is the most challenging one because, unlike other albums, almost all of the music on it was recorded live and without adding any effects at the post production stage,” he explained. “More than 30 bowls were used, each of which sounds very different to our ears. Each bowl has a complicated radiating pattern because the radiation comes from the different sizes of the bowls and the material it is made of.”

With the help of d:vote 4099 Instrument Microphones, the live performances given by Tsang were captured and 39 tracks were recorded over a period of three days. The album has now been released and is relieving stress and assisting personal meditation amongst Tsang’s followers.