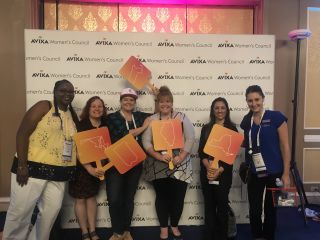 As AV industry women and men gathered at the Westgate for the AVIXA Women's Council Networking Breakfast Wednesday morning, they found themselves seated around tables of like-minded colleagues from their home state. This seating arrangement spoke to the power of regional networking and the importance of collaborative action—which was the point.

To hear several council members tell it, the breakfast seating was inspired by a trend that has defined and energized the AVIXA Women’s Council. Over the past year, regional groups have grown organically by word of mouth or by what Cory Schaeffer, director of systems solutions at QSC, described as “tapping other women on the shoulder and saying ‘you can do this, let’s do this.’”

The new regional groups have quickly transformed the Women’s Council from a once-a-year opportunity to a multi-faceted, action-oriented network. “Different women stepped up to take on Dallas, Houston, Atlanta and New York,” Ricketts said. “Anyone can be a member, you just need to be a champion for diversity.”

Council groups network, help each other get their CTS certifications, connect to other educational opportunities, tour site installs, share information on job opportunities, and more.

“At our first meeting we had 16 women show up,” Schaeffer said. The group did a session that earned RUs, and went from there. She said that having two people lead helps spread the responsibility and makes it possible for busy women and their allies to move industry diversity forward.

In addition to the 17 groups that have formed, Ricketts said a virtual group is also in the works to keep women connected throughout the year, in ways that extend beyond the two-hour networking breakfast.