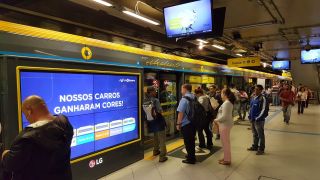 AdMobilize's AI-powered Audience Analytics System has been integrated into new interactive subway doors that are now deployed at three subway stations on the Yellow Line of the Sao Paulo Metro in Brazil. Over one million passengers travel the Yellow Line every day.

According to AdMobilize CEO and co-founder Rodolfo Saccoman, the incorporation of the AdMobilize anonymous Audience Analytics Solution into the subway system’s new interactive doors will provide ViaQuatro, the company responsible for the new interactive doors, with an advertising platform that also delivers detailed data on the amount of people who watch the displayed advertising as well as their emotional responses while doing so. The screens of the doors are also being used to provide travelers with updated news and information.

“The AdMobilize system quantifies the number of people standing in front of the doors along with their gender, age, dwell time, and facial emotion analysis,” Saccoman said. “These expressions include happiness, surprise, neutrality, and dissatisfaction, among others. The traditionally used, historical-based proof-of-performance data is incomplete and highly inaccurate. Thus, advertisers are quickly embracing AI-built analytics in order to dynamically change their ads and reliably understand the true impact of their advertising.”

According to Saccoman, AdMobilize technologies are now deployed in 82 countries and 469 cities around the world. “Like other major cities around the world, the city of Sao Paulo is making significant investments in understanding its inhabitants, improving mobility, pushing toward a smart city overhaul, and providing accurate data. This is an important step that we expect will be implemented throughout the city’s metro system over the next several years.”

ViaQuatro is the concessionaire responsible for the operation and maintenance of Line 4-Yellow of the Sao Paulo subway, the first public-private partnership agreement in Brazil. The contract with the Government of the State of São Paulo, signed on November 29, 2006, allows the concessionaire to operate and maintain the Line 4-Yellow subway for 30 years. ViaQuatro has invested US $450 million between systems, equipment and trains. Over the 30 years of operation, it will invest more than U.S. $2 billion in the line.

The system was installed by integration firmH2A.NET; Inviron Technologies powers the CMS system deployed in the installation.

“AdMobilize is growing rapidly in Brazil and our platform was chosen for this project, as it is for many others, because it is the most reliable, accurate, and trustworthy platform for this important and highly visible kind of project,” Saccoman said. “Our technology is quickly being implemented in airports and other transportation centers where the capturing of accurate audience analytics is a top priority.”