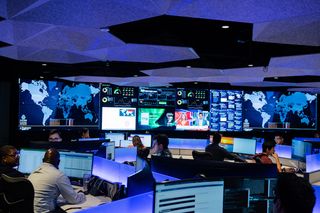 With the growing prevalence of surveillance technology, it’s no surprise that the command and control room is a hot topic in the AV community. From their traditional use in government facilities to their increasingly common appearance at schools and universities monitoring for things like active shooters, the list of uses for tricked-out command and control rooms is on the rise.

Because of the mission-critical status and 24/7/365 operation of these centers, it is imperative that the AV used in command and control rooms is at the forefront of technology.

Big Data Is of Big Importance

The role of big data in command and control rooms is continually growing—due in part to the “proliferation of smart devices and infrastructure,” according to Andy Thompson, vice president, marketing and product management, RGB Spectrum. “Real-time dashboards can present large amounts of data effectively to improve situational awareness and decision making.”

Integrators need to remember that dashboards aren’t the only data-gathering method—end users are operating multiple AV sources to monitor data. “Big data is a reality of today’s technology marketplace,” said Jonothon Wheeler, director of innovation and emerging technologies, Solutionz. “It is becoming more complex, and successful integrators understand that it can originate from dashboards, cameras, and security access systems—even off-premise physical devices being monitored by a sensor.”

Wheeler says his company handles big data by working closely with Solutionz’s customers to understand what “information they want at their fingertips during normal operations, as well as during crisis management.” Once they discover their clients’ needs, they run through several scenarios to ensure the needed data can be easily accessed and distributed.

Once it is determined what data will be needed, integrators must work with their clients to figure out how to distribute the data to clients. “Big files—a characteristic of 4K-plus resolution images and the use of AI as part of the data analysis process—contribute to demand on big data management,” said Brad Sousa, chief technology officer, AVI Systems. “The solutions vary depending on the mission and type of command and control center, but these solutions typically include SAN-based network storage and media asset management platforms. These MAM platforms often include AI integration for media meta-tagging and media analysis.”

One of the first steps in the process of building command and control rooms should be thoughtful and careful planning in a way that includes all project stakeholders. “It is important for [integrators] to have security conversations with [their] customers and manufacturers at the start of the design phase,” said Wheeler. “This ensures that there is a clear understanding of the security level the customer is looking for in the room.”

Souza added that his team carries security clearances so they can access mission-critical information and, as a result, can assist with the development of technology security plans.

Experts agree that the development of the plan should include pro AV manufacturers. “There are many moving parts, but it boils down to the idea that integrators must work closely with the manufacturers to understand the product and use case—while simultaneously working with customer security teams to make sure the product is going to meet their standards and to understand the process of implementing and testing these security features during commissioning,” said Wheeler.

Finally, user training plays a huge part in keeping command and control rooms secure, according to Black Box’s director of product management for AV and infrastructure, Jonathan McCune. “If users don’t know how to operate systems and handle data properly, any ‘secure’ AV system can be compromised,” he said. “Thus, security also comes from working with straightforward, user-friendly user interfaces and GUIs, with the backing of technology training by the system provider.”

In addition to overarching trends, there are specific sets of pro AV technology that are heating up the command and control market. When we asked the experts, they all agreed that direct view LED video walls are at the top of that list.

“A key trend we are seeing is the increased adoption of LED video walls in command and control rooms,” said RGB Spectrum’s Thompson. “In addition to being bright, reliable, and energy efficient, LED panels provide a completely seamless video wall canvas because they don’t require bezels.”

The transition from thin-bezel panels to direct view LED screens is driven not by price, but by the increased ability to drill down to the pixels. “The issue is the accuracy of the image being presented,” said AVI Systems’ Souza. “Unlike many commercial applications, command and control spaces are most often designed to support situational awareness, to enable the users and decision-makers to rapidly make decisions. Often the decision is made on the context of the image, not just the message of the image.”

Another technology trend is the use of AV over IP when it comes to data gathering and distribution. IP-centric distribution can be difficult because raw data, images, and video are frequently analyzed by one group and then combined with AI and analytics before being sent to another group, according to Souza.

“The challenge that comes with this trend is that many different, isolated solutions and applications must be integrated into a single system that allows for user-friendly operation and administration,” said McCune. “For use cases such as video extension, switching, video wall (cockpit-style) management, and system control, users benefit greatly when they can take advantage of all these features from a single system, interface, and management console.”

Command and control room managers are also turning to integrators to help them use their existing infrastructure as part of the overall system. According to Wheeler, working like this “requires integrators to talk IT language and be open about the system design and impact of new installs on the enterprise network. Companies today, regardless of size or industry, want reliability, security, and ease of use, coupled with more insight into their systems and [round-the-clock] support.”

One would think the AVaaS model would serve the command and control market well. But that doesn’t appear to be the case.

“We are not seeing AV as a Service as a desired purchasing model for command and control,” said Souza. “Many customers are interested in the topic, but become less interested when they consider the practical implications of AV as a Service for mission-critical applications.”

Wheeler agrees. “We are still seeing [command and control rooms] managed as mission-critical specialized rooms within the confines of the physical location by their own teams, especially in cases where the company has multiple rooms throughout the country sharing real-time data.”

An additional challenge, Souza pointed out, is budgeting issues. Many command and control customers are governmental agencies who “do not receive financial benefit from operating expenditures versus capital expenditures.”

As technologies evolve and governments, educational facilities, corporate campuses and the like continue to expand the uses of command and control rooms, it appears this market is on a growth trajectory, which is a win for integration firms.

“Command and control room technology, along with the requirements presented by our customers, is constantly changing. Designing systems that are flexible and forward-looking is one of the most important tasks we have as integrators,” concluded Wheeler. “These rooms are used 24/7/365, and can afford little to no down time. It’s vital that we continue to integrate these rooms efficiently and, most importantly, to our customer’s satisfaction.”