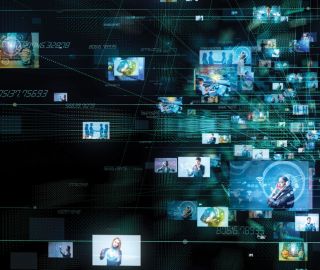 The technologies fueling today’s digital signage applications are as diverse as the content delivered to consumers. Traditionally rooted in ecosystems dominated by media players, encoders, matrix switchers, and hardwired connectivity systems, digital signage’s back-end is driven by above all else reliability, especially in mission critical applications such as control rooms and hospitals.

As experienced across the entire AV industry, IP networking has begun to play a major role in the infrastructure that goes into delivering dynamic digital signage projects even as traditional solutions like HDBaseT and proprietary connectivity platforms continue to have a foothold on systems creation.

IP-based AV networking is nothing new, but the prohibitive costs of hardware such as matrix switchers and networking issues (interference, bandwidth, etc.) have often kept AV integrators from fully embracing it as a total solution for commercial appli-cations. As robust networks have increased reliability and knowl-edgeable IT professionals have begun to join AV’s ranks, grasping IP-networking’s architecture is becoming essential for best practice AV integration.

“As new technologies continue to emerge, the solution range continues to expand,” noted Jeff Hastings, CEO of BrightSign. “The world is moving from a separate point-to-point network solution (HDBaseT) to a more unified network solution that uses standard networking technologies. These new solutions compress the video signal using both proprietary and industry-accepted codecs. The main technology hurdle that the new technologies are trying to overcome is latency.”

This screen-to-screen delay, as Hastings underscored, is a problem that is currently best handled with HDBaseT, but newer technologies using proprietary codecs are getting better at handling this problem though at the expense of bandwidth—forcing the use of a separate network to effectively use them.  Industry standard codecs, notably H.265, eat up considerably less bandwidth, but latency problems still remain.

“The advantages of the new AV distribution systems is that you can use standard networking equipment (cost savings) and the number of endpoints is easily expanded using standard ethernet ports,” Hastings added. “So, with all of this information, what is an integrator to use? If latency is not a key factor, using H.265-based solutions is going to be the most cost effective. For cases where latency is a key factor, HDBaseT or IP solutions using proprietary codecs would be best. The IP-based solutions are going to be easier to expand.”

The numbers bear this out. In a report issued by Futuresource Consulting in October 2017, AV-over-IP encoder/decoder ports enjoyed a year-on-year increase of over 130 percent in the pro AV low-latency market.

“This is a game changer for the industry and its impact can-not be overstated,” said Anthony Brennan, research analyst, Futuresource Consulting. “We’re seeing the beginnings of a trend that will shake up the industry, with our forecasts pointing to a volume CAGR of nearly 50 percent during the next five years. Make no mistake, AV over IP will transform the way the pro AV market interacts with and controls AV systems.”

AV’s growing reliance on the network has forged a cozier relationship between AV pros and IT departments. Many AV integration companies have expanded to include dedicated IT departments or are, at the very minimum, partnered with IT companies—both outside and inside client companies—to ensure iron-clad deployment of network-reliant integration projects. The benefits are far reaching especially when measuring project scalability.

“I feel that network infrastructure plays the primary role in any large digital signage deployment,” said Joseph Yost, director of integration, CCS Presentation Systems. “For central management and distribution of content, having a viable network and informed IT staff is critical. Getting the IT staff informed and onboard early in the design phase creates a higher chance of a successful implementation.”

AVoIP’s architecture has also had an impact on its growing acceptance. As Mark Stross, chief technology officer of integration company, ANC, pointed out, the network allows for greater decentralization giving the integrator more flexibility.

“By reducing the integrators hardware footprint and convert-ing more hardware tasks into software, the overall costs of future deployments decrease,” Stross said.  “Future expansion costs are contained and usually come down over time. The IP technology fundamentals include scaling more cost-effectively and by its nature, far more organically than a hardware solution.”

“A system that is not reliable or is not stable is going to have the end customer very frustrated and is going to cost the integrator all of his profits by having to ‘fix’ the system,” Hastings said. “The key components where reliability and stability differ in the solutions that are available are the network/connectivity to the internet and then the media players. Making sure to use good networking equipment and having a reliable internet connection is the start.”

Outlining three media player choices—traditional PCs, purpose-built media players, and screens with built in players (SOCs)—Hastings noted that PCs have been the standard, but are plagued with issues arising from their consumer operating systems, while SOCs’ inability to handle streams that mix HTML content and video often used in digital signage are not best-case uses for these screens.

“Purpose-built media players, such as those from BrightSign, are designed to have extreme reliability,” Hastings said. “By eliminating the consumer operating system and building single Printed Circuit Board (PCB) designs with low power consumption, these products have extremely low failure rates.

“After network connectivity and the media players, the next item on the list would be the screen,” Hastings continued. “Many integrators will try to find the lowest-priced screen. This is the wrong place to save money. You want to make sure you have a bright screen (400+ NITS) and one that is built to be on for 16 hours a day.”

With IP networking already shaking up AV integration and gain-ing a foothold as a cost-effective go-to solution, digital signage integrators need to not only stay abreast of technology changes effecting this competitive market, but also anticipate what comes next.

“Currently, integrators need to become knowledgeable in networking and streaming,” Stross said. “This lack of education is caused by business firewalls preventing some operators from moving into the future. Hardware previously made it easier to understand the signal path and troubleshooting, but that has all changed. Moving forward, the IP network is cloud-based and will contain complexity beyond what we have experience so far in terms of digital signage.”

Stross recommends that digital signage firms create alliances with companies that augment skills in video and audio streaming, network administration and setup, and content creations to boost their knowledge in those areas.

Forming such alliances are in line with CSS Presentation Systems’ practice of aligning with partner manufacturers—a mutually beneficial relationship that allows Yost and his colleagues to offer them industry opinions and product feature sets to better help with implementation of network solutions while manufacturers provide information and training on their products.

An expanded networking knowledge base best serves future developments for AVoIP within digital signage, which among our experts include the move toward more cloud-based systems, IP-streaming media platforms, and even stronger IP-based networks.

“The current infrastructure of category/fiber cable is and will be the digital signage connectivity, now and in the future,” Yost said. “Networked systems are only getting larger and larger. More so than ever, systems are using networks and cloud services for connectivity. As with other disciplines, migration to the cloud is upon us. However, we as an industry need to be cognizant of oversaturating the customer with too many cloud services fees.”

“For years, we have used the concept of canned media played through playlists. The canned nature instantly turns displays ‘stale’ after all the content is exhausted from the playlist,” Stross said. “Digital signage operators can’t afford to always maintain fresh playlists within our current systems. Quality wireless band-width is rapidly expanding through metropolitan areas and, therefore, content can easily stream from any location to any dis-play with minimal hardware. IP streams and control mechanisms using IP streams are the future technologies that will change our industry.”