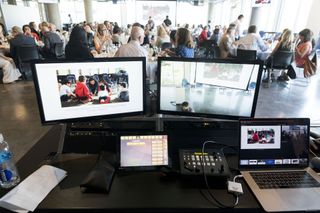 LMU strives to outfit students with the latest tools and engaging pedagogical models to prepare them for success in the competitive movie and TV industries. (Image credit: Loyola Marymount University)

Loyola Marymount University's new Playa Vista Campus in Los Angeles, CA serves as a creative center for graduate and professional education, anchored by LMU's renowned School of Film and Television (SFTV). A garden of 4K and high-tech delights in the heart of Silicon Beach, the new facility represents the university’s goal of preparing students for success in the competitive movie and TV industries. One of LMU’s keys to career readiness is outfitting students with the latest tools and engaging pedagogical models. After graduation, these aspiring filmmakers, editors, writers, and showrunners should be well-positioned to not only join the industry, but to lead it. The AV team sees its role as a technological partner and a mentor—keeping the entire LMU community current on the state of technology and its latest iterations.

“We worked with the faculty and staff of the School of Film and Television to create the technology plans for the facility,” said Matt Frank, associate director of Classroom and Creative Services, Information Technology Services, at LMU. “They know what their plans are for the future of technology in the program and they know that when students go out into the workplace, tech will continue to change.”

For LMU’s Classroom and Creative Services team, creating the right spaces for the School of Film and Television came down to choosing the right partners, listening closely to users, and then cultivating long-term relationships with them to achieve the most desirable results.

“We collaborated closely with the school’s faculty and staff, because they really have their fingers on the pulse of post-production technology,” echoed Brian Kotowski, post production supervisor at LMU.

For instance, “at the time we were starting to plan this building, HDR was at the forefront,” Frank said. “The faculty and staff were able to identify HDR as something that they needed to have in post-production when this facility was up and running.”

The general classroom designs were driven by the faculty’s preferred teaching styles, rather than conventional classroom layouts. “We have a lot of screenwriting faculty who are teaching in this facility and they don't like the traditional classroom [design] with rows of desks or rows of tables and chairs,” Frank said. “They want to really have that writer's room vibe as they're teaching. [So] they want a conference room with lots of writeable surfaces, with a screen that they can easily just show screenplays on or connect their laptop to.”

The takeaway: “Striking that right balance to find spaces that'll work for each group was achieved by having conversations with them, and really involving them in the process,” he said.

LMU moved AV support into the university’s IT department five years ago. Today, “we see AV as a subset of IT,” Frank said.

This philosophy has led to IT playing a major role in designing the school’s AV facilities, in part because modern AV relies so much on digital technology and data transmission to get the job done. “For example, our networking team was hugely influential in the design of this building because we need to make sure that the right spaces have the right network infrastructure to move these large video files,” he said.

The secret to bringing AV and IT together is to break down the traditional walls between these sectors and get people to work together. At LMU, “Brian works within the School of Film and Television, and I work within central IT, but we have an incredibly collaborative and close relationship in making sure that this facility is successful,” Frank noted. “At the same time, Brian works with our networking team as well to make sure that the needs are met.”

In creating AV-enabled spaces at LMU’s School of Film and Television, the AV team wanted to build “transformative” facilities that help instructors actively shape their students’ knowledge and world views. At the same time, these spaces need to be flexible (multipurpose), and active (i.e. fitted with AV technologies that actively engage the students’ minds as they learn).

To understand how the school’s rooms are actually being used and what could be optimized, the AV team monitors their operations over time using an AMX Resource Management Suite (RMS). It combines this data with the feedback offered by staff to decide which improvements make the most sense.

“We let data drive our decision making, but because we do have such good conversations and such a good relationship with our faculty and with the technical staff, I feel like we are able to make better decisions through a combination of data and relationship building,” Frank said.

According to the booking data, active learning rooms are in high demand: “As we started to put more active learning spaces on campus, we see that those spaces get requested more and more,” he explained.

Intersection of AV and VR/AR

The growing popularity of virtual reality (VR) and augmented reality (AR) is opening up job opportunities for properly trained practitioners. Not surprisingly, the School of Film and Television is watching this trend with interest and positioning its curriculum and AV facilities to keep up.

“The School of Film and Television is actively pursuing some hopeful, professional partnerships with studios on VR and AR,” Kotowski said. “If those come through, we are hoping to house those in this facility. It is definitely something that has been on our minds for the last few years.

The AV team is hedging LMU’s VR bets by using the Dolby Vision and HDR10 production systems. “We're set up to master in both,” he said. “That was one of our big initiatives this year.” He added that the School of Film and Television is particularly interested in its students mastering Dolby Vision, because the format is popular with Netflix.

Working in, editing, and sharing VR means extremely large file sizes, so network throughput cannot be an afterthought. This is why LMU’s AV team and central IT department are working collaboratively to stay ahead of the school’s burgeoning bandwidth demands.

“One of the great things about collaborating closely with IT is that we have open discussions about networking,” Kotowski said. “We talked about getting a new server specifically for the School of Film and Television early last year. We picked an Avid NEXIS: I worked with Matt and his team and Networking to spec that, get it installed, and create something that we can continue to build on in the future.”

As a result, LMU’s AV team is ready for VR/AR to come to class. “Most of our AV technology for that is already in place,” Kotowski said. “On the networking side, it would just be a 10-gig pipe to the NEXIS server.”

“The way the network infrastructure is designed in this building is that any port within the building can be a 10-gig port,” Frank added. “By default, they're 1 gig, but we have the capability to transition those to be 10 gig. If the school says, ‘Oh, I really wish I had 10 gig to this particular location,’" that's a pretty easy ask on our end.”

There has never been more emphasis on the user experience (UX) in AV than there is today—an emphasis that includes ensuring consistency as people move from space to space.

At LMU, “our goal is that the user interface is standardized for the faculty member,” Frank said. “When they go in to teach in a location, they know how that room is going to work.”

“Whether it's standardized in the actual AV stack is a little bit different,” he added. “For example, we use a lot of AMX and Extron right now. But we also have Crestron rooms on campus.”

But because faculty members just need the technology to work—instantly and reliably—LMU “works very closely with our integrator for this facility, Spinitar, and our other partners, to make sure that the user interface in the classroom is the same, no matter how the technology stack is structured,” Frank said.

"LMU Playa Vista Campus was designed to inspire creativity and innovation, and that vision was brought to life by a collaboration between faculty and the university’s AV and IT professionals,” said Peggy Rajski, dean of the School of Film and Television. “Their commitment to creating a true active learning space allows LMU students to be immersed in one of the most vital, thriving creative hubs on the cutting edge of technology in entertainment.”

Margot Douaihy, PhD, is a writer, editor, and storyteller based in Northampton, MA. She teaches at Franklin Pierce University.

LMU partnered with Spinitar, an integration firm with decades of classroom AV experience, to help develop the budget, scope, and systems design for 33 new rooms. The AV and post-production technology also needed to match the contemporary aesthetics of LMU’s environment and the design plan. Spinitar selected Epson projectors for 11 of the news spaces and worked with local manufacturers that would make testing, installation, and support more productive. Spinitar collaborated with Draper, Stewart Filmscreen, QSC, and Avid, among others, to streamline the process. Info courtesy of Spinitar.