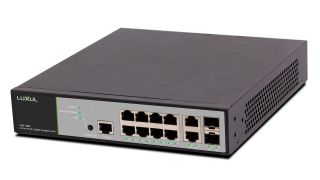 One of the greatest challenges facing tech managers today is the need to distribute AV signals long distances with near-zero latency from a variety of sources to a myriad of displays in large facilities. Transmission distance and quality are factors, which are compounded by the need for cost effectiveness, ease of deployment, and scalability.

For our purposes, we’ll define signal extension as sending AV signals over long distances while maintaining quality. These long distances, of course, are relative to whatever length is considered normal. So, for example, if HDMI signals can generally go no further than 50 feet without suffering from degradation, transmitting them longer than that would be considered extension. There are two technology groups for doing this: AV signal extenders and packet-switching extenders.

AV signal extenders convert signals from one physical media that has a shorter distance limitation to another media that can go further. In this type of solution, distance is typically still a limitation, but latency isn’t. AV signal extenders are useful for all sorts of formats, from HDMI to DVI, VGA, composite, USB, and more. For example, HDMI extenders can break the 50-foot barrier by transmitting over Cat-x cabling up to 300 feet.

While signal extenders have their place in AV networks, what we’re concerned with for distribution systems is packet-switching extenders, which convert the signal to digital form and then break it into data packets that are sent over category media (Cat-5e/Cat-6/Cat-7 or fiber-optic cabling) using a standardized communication protocol. Two of the more popular protocols are TCP/IP (AV over IP) and HDBaseT. In both protocols, the data is packetized and carried over standard media, but they aren’t compatible with each other. In other words, the wiring of an HDBaseT system cannot carry TCP/IP data, and vice versa.

The fundamental difference between HDBaseT- and IP-based distribution systems is that IP systems can take advantage of standard Ethernet infrastructure, while HDBaseT systems can’t. This has profound implications when it comes to transmission distance. HDBaseT systems are limited by their physical media; the range for Cat-5e/Cat-6 cable is 100 meters, which poses a big problem for these solutions in large networks. By utilizing existing Ethernet infrastructure, that limitation is eliminated for AV-over-IP systems, which can transmit full HD (even 4K) signals over great distances with imperceptible latency by connecting network switches (more on those shortly).

To illustrate this point, let’s take a university campus as an example. At the university, all AV sources are located in the mass communication building’s AV center. Each source is connected to a transmitter that encodes AV signals into IP data, which is fed to the network switch. Each display in the building is equipped with a receiver that decodes IP data back into AV signals. The network switch sends the IP data from the transmitters to these receivers, which send the decoded AV signals to the displays for playout.

The Heart of the System

With its advantages over HDBaseT, it’s not surprising that AV over IP continues to grow in popularity and deployment. As it does so, one component has become increasingly vital to the system: the network switch. Unlike traditional, more expensive AV matrix switchers, network switches aren’t pre-configured to a specific number of inputs and outputs (4x4, 8x8, 16x16 etc.). So, while AV switchers often fill up—leaving no room for the system to grow with new sources and displays without the purchase of another matrix—network switches don’t have the constraints of a fixed physical size because to the switch it is all simple IP data traffic (however there are bandwidth limitations). To expand the distribution system, all that’s needed is a transmitter for each new source and receiver for each display.

Due to the central role network switches play, most AV-over-IP systems will require a higher-end solution. This isn’t the time to just grab the cheapest switch at the local discount store; it’s not going to handle the video traffic or have the features needed to properly manage the network. A managed Layer 2 or Layer 3 switch is almost always required.

Two of the more important features to look for when selecting a switch are support for virtual local area networks (VLANs) and IGMP snooping. VLANs allow the network to be segmented. IT professionals can use them to isolate video traffic, preventing it from slowing down other parts of the network, and to facilitate the sharing of sources among displays. IGMP is a mechanism for AV systems that utilize IP multicasting. It prevents the switch from sending multicast data to every port, degrading performance and chewing up network bandwidth.

For IT professionals, the goal line for signal extension will always be shifting. There’s already a push for the transmission of uncompressed AV signals with near-zero latency and streaming in 4K resolution is in high demand. Someday, they may even be called on to transmit full-fidelity 3D images and audio for hologram videoconferences. But for today’s AV distribution needs, they’ve scored a touchdown with AV over IP systems utilizing managed network switches. These systems can cost-effectively deliver the highest resolutions to virtually unlimited displays from any number of sources over areas of just about any size. And they offer simple scalability to easily meet an organization’s future needs.