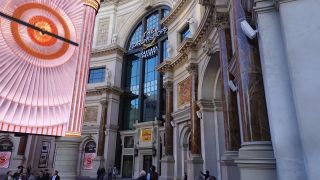 Facing the busy Las Vegas Strip is the Forum Shops at Caesars Palace, a 664,000-square-foot shopping mall. Busy with pedestrian, shoppers, and those staying at the opulent Caesars Palace, it is a main stay of the Strip. The Forum Shops’ entrance recently underwent an AV upgrade involving a vertical marquee, a complement of digital visuals evoking ancient Rome, and a large-scale distributed audio system employing over two dozen loudspeakers from Bose Professional, including modules from the Bose Panaray and FreeSpace lines.

These upgrades were initiated by property owner Simon, which is known for luxury shopping malls. Moment Factory, with support from Acquire Digital, created and implements new graphics, visual design, and content.

“Our challenge was to design content that would stand out on one of the busiest streets in the world, so we added digital visuals to the classical architecture by crafting a modern twist on The Forum Shops’ own Ancient Roman aesthetics,” said a representative from Moment Factory on the company’s goals for the visual aspect of the project. “Our team built 22 animated capsules using 3D architectural illusions to capture tourists’ attention from all angles where the Marquee can be seen.”

But after the installation of these visual elements, all agreed something was missing.

“The visual elements were an outstanding success. Immediately we had visitors stopping to look and take pictures, and that increased traffic to the shops,” said Christian L’Heureux, producer, Moment Factory. “But we wanted a more immersive experience, so we added a sound layer to the project. I think the best way to tell a story and have a captivated audience is to have sound, because it crystalizes the experience for the visitor.”

Craig Breigle, Mood’s director of retail and development system sales, has regularly worked with Mood client Simon, handling sound systems on their various projects. “Once they brought on Mood for the audio phase, we looked at Moment Factory’s design, and began evaluating system options from multiple brands. For all of us, especially given Simon’s very high standards throughout their properties, Bose was the clear choice in terms of sound systems and support.”

“Simon was definitely looking for high-quality sound in an outdoor space with lots of bass. They really wanted to make a big splash and have it be impactful,” Breigle added. “The system is simple, yet comprehensive in terms of its coverage.”

The white Panaray 402s are arranged on the building’s façade, and the black 402s are placed at the bottom of the marquee. The MB12 subwoofers—not visible to the public— are inside the marquee, and they project the bass frequencies down and out through the bottom of the marquee. The FreeSpace 360P environmental loudspeakers are installed in the landscape beds along the sidewalk between the show area and Las Vegas Blvd.

Throughout the course of the project, Mood worked closely with Bose Professional personnel to ensure that the audio system would meet the goals that Simon had outlined and that it would complement the graphics created by Moment Factory.

“After coming up with the initial system design, we ran it through Bose Modeler software to see exactly how the system would perform, and after verifying the results, we moved to the installation phase,” Breigle said. Bose, Mood, and Moment Factory all partnered on getting the system commissions. Then, one evening, when they loaded all of the audio content and hit play, “it was the loudest, best-sounding, most attention-grabbing attraction on the Strip.”

“It’s the biggest and brightest thing on the Strip right now,” concluded Breigle. “It’s always about one-upping the next guy in Vegas, and the audio and visual content at The Forum Shops are second-to-none.”

"Our new marquee has had a very positive impact for The Forum Shops at Caesars Palace – it has elevated our presence on Las Vegas Blvd in grand style,” added Chip Harding, senior vice president of business development at Simon. “The marquee's unique design has changed the digital signage landscape in Las Vegas. We have definitely raised the bar in a market that is notorious for audio and visual stimulation."