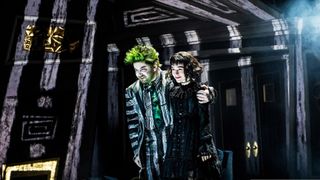 When you’re trying to convince a theater audience that the action on stage is happening in another dimension, it helps to have a little magic up your sleeve.

Opened on Broadway in April, Beetlejuice delivers visual enchantment in spades, courtesy of veteran projection designer Peter Nigrini. With a combination of direct-view LED scenery and a chimerical melding of digital projection and stage lighting, the musical transfixes audiences with an atmosphere that fits the delightfully weird Tim Burton world like a glove.

“It’s really that melding of the technology and the art form that I really get excited about,” said Nigrini, who has more than a dozen Broadway shows to his credit. “How to make a $3 million pile of equipment move and participate in the theater in a sort of effortless way—that’s part of what I find so exciting about it.”

According to Nigrini, the show was initially going to incorporate projection only in a couple select scenes, ones in which the show director Alex Timbers felt “needed something beyond what scenery and lighting could provide.”

“The notion was that it was just those specific moments,” Nigrini said. “But then once everyone decided I was going to be in the room, and that we were going to start using this technology, I’m always a big fan of finding a way that it’s part of the whole fabric of the show.” The plans eventually led to a production that is pervaded by projection—but in a way that’s not always overt.

“In Beetlejuice, the boundary between lighting and projection can become porous, and you sort of don’t know what you’re looking at anymore,” Nigrini said. “Ultimately, they’re both putting light on stage, just using different technology. Over time it crept in, and I remember Alex [Timbers] one day saying ‘Wow, I really did not imagine that there was going to be projection all the way through the show. But now that there is, I really like it.’ So that was the journey.”

Running with the idea of projection throughout, Nigrini next had to plan its execution. He specified four 20,000-lumen Panasonic RZ21K LED laser projectors with WUXGA resolution. “I am a great believer in Panasonic projectors,” he said. “Everyone uses them in the theater, and it’s driven by a number of factors.” According to Nigrini, their form factors fit the strict demands of theater, and he favors them for their low noise levels and ability to output true black. “Every video projector, when you send a black signal, it’s not actually black,” he said. “There’s some small bits of light that come out of it. And 90 percent of the users of these things don’t care about that. But in the theater, it’s critical to us.”

At first, he had considered using rear projection for the backdrop as well, but this proved impracticable due to space limitations. “You cannot imagine how little space there is do all these things that we do, the amount of gear and equipment and technology we’re packing into these 150-year-old buildings that were never designed for it,” Nigrini said. “I’m always amazed.”

The only solution for this was to use an LED wall—a choice Nigrini said gave the other creative directors pause. “Everyone said ‘We don’t want LED,’ like they had memorized that picture of what LED looks like on the Oscars or at a Taylor Swift concert,” he said. “And it’s like, ‘No, we can use that device, but we can make it feel like something else.’”

Nigrini ended up specifying a 25-by-18-foot 2.9mm ESDLumen LED wall, then imparted some tricks to disguise it and blunt its output. He and his team placed a plastic diffuser in front of it, then covered the diffuser with a painted sheet of unbleached cotton gauze. “Instead of a corporate environment or something like that where the image is the standalone, sacrosanct thing that you want technical perfection from, often in the theater what we’re trying to do is break the edges of it and get the image to become a part of the scenery and the world we’re in,” Nigrini said.

The shortage of space proved challenging for the stage projectors as well, and required some creative solutions. In fact, one of the projectors needed to be mounted on a lighting truss that moves during the show. “The lighting trusses are all moving in and out, and there’s a flying lighting truss in Beetlejuice that a projector flies with,” Nigrini said. “We are tracking the location of the flying truss, so that we can then correct in real time the image that’s coming out of the projector to make it look like the projector isn’t moving. And that’s all because there’s nowhere else for the projector to be. It’s literally the only place that that projector can be.”

Aiding in the real-time calibration of the projector is the production’s disguise 2x4pro media servers. “It is an amazing product, very sort of bespoke,” Nigrini said. “Disguise has kind of revolutionized the way we think about projection design by making the environment we project in fully three-dimensional. That we think about a full 3D model of the stage at all times, and the ability to manipulate that model in real time, that sort of changed the game.”

Nigrini said that he designed the first theatrical show that disguise provided media servers for, and has had a working relationship with the company ever since. “The number of instructions, the number of cues that are written in a show is often an order of magnitude greater than what they’re expecting to see anywhere else,” he said. “And that’s great for them too; I push their equipment harder, because I have more time.” Nigini said that between an in-town production and an out-of-town production, he might spend 20 weeks working 18 hours a day, six days a week just writing cues for the projection. “That’s a lot of time to write instructions, and do things like sort out this projector that’s flying on a truss, and how to handle all that,” he said.

Once Nigrini’s studio laid out the exact location of projectors and display devices and specified the media server environment, the production hired an engineer to create a more detailed schematic diagram and engineering drawings—including specifying equipment like the router and matrix switchers. For Beetlejuice, these include a Lightware MX-FR33R matrix router, Gefen EXT-DVI-FM500 DVI extenders, Avitech Titan 9000 multiviewer, and Adder XDIP KVM extenders.

The equipment list was then handed to AV rental firm Sound Associates, which supplied the gear, and then a team of engineers hired by the production at Nigrini’s recommendation completed the installation. “I have three or four engineers that I like to work with and trust, and who understand what I want from a system,” he said. “And they then do the detailed work of how it’s built. And then ultimately installing—those guys join us in the theater and get it up and actually get it to work.”

The musical has proven quite successful since opening in the spring, with The New York Times chief theater critic Ben Brantley calling it a “jaw-dropping funhouse.” For Nigrini, the production’s success lies in its unprecedented blending of lighting and projection.

“The visual integration between the two in Beetlejuice I think was unique, in that so much of the way the scenery is being lit is in fact projection, such that distinguishing between the two kind of becomes impossible,” he said. “And I think that’s some of the excitement of the production, is that integration allows in a way for magic.”