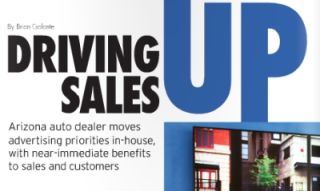 “The old saying is that everybody knows half of your external advertising works and half doesn’t—you just don’t know which half,” he said. “I looked at all the dollars I was spending on outside media, from billboards and print advertising to electronic and digital. And it made sense to pare down some of those outside dollars and bring them in-house.”

Wow Factor
Honda of Superstition Springs planted the seed for its current in-house advertising solution in 2008, when the company launched programming from the Automotive Broadcasting Network, or ABN. Earlier that year, ABN launched its Dealer TV service to enhance the automotive retail experience for customers and better control sales environments. Much of the content was entertainment-based programming from CBS and other broadcast and cable networks, along with customized, dealership-specific advertising.

In 2012, ABN transitioned from its broadcast satellite platform to an Internet-based architecture to execute a more dynamic content strategy. The company is using the InfoCaster suite from Harris Digital Out-Of-Home to create content, manage the network and play all the media. The InfoCaster platform gives ABN far more flexibility to communicate targeted messages not only to different dealerships, but to various departments at each network location.

“To date, we have more than 600 media players deployed, powering more than 1,000 screens in 42 states,” said Jerry Daniels, president and CEO of Automotive Broadcasting Network. “And we are hearing plenty of success stories, from building positive customer relationships to driving transactions.”

Honda of Superstition Springs is certainly one of those success stories. Zamora reports that there was an initial “wow factor” with the new digital signage-driven rollout, injecting new life into the 8-year-old dealership.

“This facility was the latest and greatest when it was built in 2005, but we’re now competing with new players and these Taj Mahal-like dealerships,” Zamora said. “We wanted to freshen up the atmosphere and make it look lively. Now when you walk into our showroom, you have these beauty shots of a cars going down the road on a large videowall and screens around the dealership. It is as close to a remodel as we can get without putting money into the brick and mortar.”

Zamora has nearly 30 screens across the dealership now, including digital menu boards in the service drive. And the targeted content tailored to each department has noticeably translated into bigger sales.

“We just had our best January on record for auto sales,” he said. “Our parts and service departments also each had a fantastic month. And we’re just getting started.”

Targeted Content
Daniels notes that the dealership’s specific business objectives are the first thing ABN discusses with new dealerships. These objectives can vary but typically focus on some combination of increasing sales, controlling environments and improving the customer’s experience at the point of sale.

The advantage of the Harris Digital Out-Of-Home platform means that ABN can now do all three very effectively.

“Each of our dealers have unique content demands,” said Robert Orndorff, vice president of operations for Automotive Broadcasting Network. “InfoCaster allows us to facilitate those unique requirements, delivering relevant content and managing the network with greater efficiency.”

Orndorff adds that ABN’s network look has improved since moving to InfoCaster, notably on the graphics side. He notes how InfoCaster allows his creative staff to include more animations in the screen designs, which he said makes the network more engaging for the retail consumer.

“There aren’t many digital signage systems that can mimic the broadcast-quality graphics you see on television,” he said. “We receive a lot of positive feedback from dealerships on the graphic quality of our network. Prior to InfoCaster we were limited in the amount of movement we could incorporate. Everything is livelier, everything is moving and everything has a transition. So we’re using this medium to communicate in a very creative way.”

This connects to the “wow factor” that Zamora describes when referencing the content on his screens, notably the large showroom videowall comprised of four 47-inch display screens.

“We call it our Honda Superstition Springs Jumbotron,” Zamora said. “The quality is crisp and clear, and the ABN provided content is very professional.”

Customer Experience
The content changes upon moving from the showroom to other departments. The showroom screens remain focused on the joy of buying a new car versus the drag of changing your oil.

“We don’t want to sell customers on our services while they are making decisions about buying or leasing a vehicle,” Zamora said. “This is supposed to be the fun time up in the front of the house. We want people to see beauty shots and learn about accessories instead of repairs.”

Still, Honda of Superstition Springs has been very effective at utilizing the targeted capabilities of InfoCaster for its parts and service departments. The dealership added digital menu boards in their service drive, where customers can clearly see available services, discounts and comparison prices. Screens hang underneath the canopy as customers drive their cars into the space. Customers can also see price lists on digital menu boards near the service advisor station and the parts boutique.

Daniels notes that the setup at Honda of Superstition Springs has been very successful at driving the customers from the service waiting area into the showroom. This includes offering test drives and trade-in incentives through car appraisals.

In the bigger picture, it represents the power of in-store advertising when properly executed.

“Dealers have been using television and radio advertising since the beginning of time to drive customers from their living rooms into the showrooms,” Daniels said. “It’s far more intuitive to leverage your captive customers when they are sitting in the service waiting area, just 10 feet away from your showroom. And it’s certainly more cost-effective.”

Zamora agrees, noting that the proof is in the numbers.

“We track how many customers we sell from the service drive,” he said. “We were averaging about 40 to 45 a month since installing ABN in 2008, we have since increased that to between 50 and 60 a month since adding the additional digital signage screens. I can spend a lot of money advertising to the general public, or I can advertise directly to the people that trust me and are doing business in the dealership. That is the most compelling reason to come in-house.”

Social Integration
The additional revenue generation is a clear and tangible benefit, but there are other benefits less obviously tied to the bottom line. This is especially noticeable on the social front.

“It’s amazing to just walk around the dealership and see customers moving around with a cup of coffee, looking at the screens and getting the feeling that they believe this a cool place to be,” Zamora said. “We didn’t see that before. People don’t notice static posters on the wall, but they are looking at our moving displays.”

ABN is also leveraging social media integration with InfoCaster, incorporating Facebook and Twitter functionality in its latest software update. One new feature delivers tweets, posts and other social feeds across the bottom; the data sticks and rotates instead of a moving across the screen as a simple scroll. This is especially popular in service areas, where dealerships can easily communicate service messages to waiting customers.

More interestingly, a new mobile app allows a salesperson to take a photograph of a customer with his new car, and quickly post a congratulations message to the dealership’s Facebook page.

“We’re really trying to integrate these screens with business processes at the dealerships while truly leveraging social media at the same time,” Daniels said.

This is a message that absolutely resonates with Zamora.

“As dealers we all operate off of profit and loss,” he said. “We ask how many dollars can we keep after everything else is paid, which we call retiring an expense. So far, the result I have received from moving more of my advertising and promotions in-house to digital signage is far greater than I could have realized. We are just out of the gate, having had the screens up for four months, and I am definitely looking to add more.”