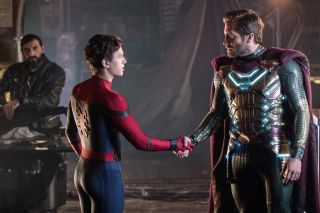 Spoiler Alert: If you have not seen Spider-Man: Far From Home, you may want to stop reading now. This tech-centric blog will unspool some of the film’s stickiest secrets.

Keep your friends close but your AV team closer. That’s one takeaway from Spider-Man: Far From Home. AV plays a surprisingly central role in the film, directed by Jon Watts and starring Tom Holland as the earnest but wily Peter Parker/Spider-Man. This clever installment supercharges Marvel’s classic superhero tale with high-tech high jinks.

Seeing is definitely not believing as the film’s villain, Mysterioso, and his team use an army of advanced drones to project holographic imagery, simulate cataclysmic weather effects, and blast cinematic surround sound. Think: the interplay of content, environment, and technology—integrated experiences at their most nefarious. Mysterioso leverages the power of immersive AV to terrify people and exploit trust with his sleight-of-hand tech trickery. Meanwhile, Spider-Man’s technologies, such as his augmented suit, enhance his abilities to serve and protect.

The technological subtext reveals how digital, interconnected experiences can shape (and distort) perception. The film also offers a piercing critique on fake news and the illusory nature of social media. AV professionals, take note: digital natives like Spider-Man can see through the illusion and bring down even the most sophisticated projections.

While Spider-Man: Far From Home is the sci-fi flavor du jour, technology and science have long proven to be effective metaphors for exploring the human condition. Think of Icarus and his wax wings, Dr. Victor Frankenstein’s hubris, and the radio-driven hysteria of War of the Worlds.

Oh, what tangled webs we weave.