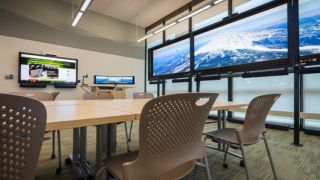 All of the monitors can display single and multiple windows, using feeds managed by the Extron control system located at the Decision Theater’s podium. Because the Mondopads come with built-in Windows 10 PCs, each touchscreen display can be used as a control surface to access, call up, and alter visual data stored on PSU’s local network, or access this data externally via the web. The Mondopads also support videoconferencing in the Decision Theater, because they are equipped with cameras and speakers, and connectable to the outside world.

Collectively, the seven Mondopads provide Decision Theater participants with a 360-degree view of data and imagery. They can visually immerse themselves in their work — and interact with it — as much as they need to.

“Inspired by the Decision Theaters built at Arizona State University, we wanted to create a collaborative and teaching space that would use visualization to attain a higher level of decision-making,” said Douglas McCartney, PSU’s director of instruction technology services, current President of the Consortium of College and University Media Centers, and the person in charge of PSU’s Decision Theater project. “The InFocus Mondopads in our Decision Theater have made this possible, because they are so interactive and flexible to work with.”

The impetus to build the Decision Theater began in 2012, when the university decided that it needed a collaborative space that would aid both students and researcher/stakeholder sessions.

“We wanted a room where we could visually display and manipulate large data sets, as well as video and video conferences,” said James Hatfield, PSU’s information technology consultant and the person who designed the Decision Theater’s AV system. “But just putting together a space with one or more video walls wasn’t sufficient. We needed interactive video monitors that would allow a meeting to break out into smaller groups, with each able to conduct its own visualisations on their own interactive display(s).”

Over time, the scope of the Decision Theater’s hoped-for capabilities expanded. Eventually, “PSU’s vision was to build a room with large visuals, powerful computing, robust video conferencing capabilities, and a collaborative, modular environment that enabled teams to examine data and reach decisions,” said Glenn Jystad, InFocus’ director of product marketing, Mondopad. “It was also essential that the technology and equipment be extremely user-friendly.”

It was at this point that PSU decided to use InFocus Mondopads in the Decision Theater. “We were already familiar with the Mondopad technology, having installed these touchscreens in various PSU class and meeting rooms over the years,” said Hatfield.

“Doug McCartney’s experience with our products was extremely positive,” added Edelen. “Given how Mondopad’s robust feature set ticked off all of the boxes of what they were looking to accomplish — including touchscreen interface, camera, speaker bar, compatibility with their existing Extron control, extensive connectivity and the seamless ability to integrate Mondopad into their existing AV systems — PSU’s staff had no doubt that it was the right solution.”

For the record, the InFocus Mondopad line of products include interactive touchscreen and business-class displays/video conferencing systems range in monitor diameter from 57- to 85-inch. The displays include built-in networkable Windows 10 computers, capacitive touchscreen technology, and digital interactive whiteboard/document annotation. When connected to an Ethernet network and incorporated into an AV-rich switching environment, the Mondopads provide users with highly capable smart monitors, controlled by direct contact with their screens and/or connected switchers.

“Doug and his team reached out to the InFocus team to help create a modular collaborative environment,” said Jystad. “They wanted to offer both a large-scale, 360-degree view of data and images, but also have the ability to work in pods or small groups on a single unit, and then share their work across multiple units.”

Beyond the seven Mondopad monitors, the Decision Theater’s AV system built upon an Extron core. “We have a futureproof Extron DTP CrossPoint 108 4K matrix switcher, which handles the feeds going to and from the Mondopads,” said Hatfield. The DTP CrossPoint 108 4K switcher comes with four DTP inputs, six HDMI inputs, four HDMI outputs, and four independently scaled DTP outputs. According to Extron, this switcher’s integrated DTP inputs and outputs “support transmission of video, control, and audio up to 330 feet (100 meters) over a shielded CATx cable”, more than enough to support all of the equipment within the Decision Theater’s footprint. This is connected by Cat 5 cable to seven Extron DTP HDMI 4K 330 RX Long Distance DTP Receiver for HDMI, one for each of the seven Mondopads.

Audio to the displays and the room’s speakers is managed by an Extron RGB-HDMI 300 A RGB and stereo audio-to-HDMI scaler, with audio reinforcement coming from an Extron XPA 1002 200-watt stereo amplifier. The Decision Theater is equipped with four TOA 6.5-inch co-axial ceiling speakers, while the session leader can make themselves heard using a Sennheiser EW122 G3 wireless lavalier microphone system.

Fitting all of this technology into the Decision Theater was a major challenge. “First, we had to search the campus for a room large enough to serve as the Decision Theater,” said McCartney. “Once we had settled on the Market 123 building, we had to make sure that the room we used wasn’t crowded out by equipment.” Fortunately, careful layout by James Hatfield and the PSU team resulted in a collaborative space that feels open and uncluttered.

Today, PSU’s Decision Theater is providing unparalleled visualisation capability in its many users. In addition to the room’s ability to provide students and professors with exceptional AV-aided education, the university “now has a high-performance, multipurpose room for researchers and community members to easily visualize data and complete individual or group work, while collaborating with others, both on and off campus using the video conferencing system,” said Glenn Jystad. “We very much got what we planned for,” added Doug McCartney.

James Careless is a regular contributor to AV Technology magazine.