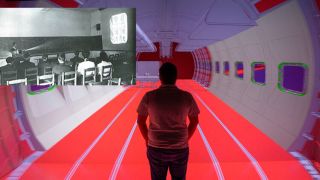 Jazzing up material for the needs of the age is a good start, but it doesn’t mean you have to throw the baby away with the bathwater. In other words, you can keep PowerPoint and your material, just use it to its fullest. That’s because today’s slide shows can remain a classroom mainstay by going beyond lecturing over plain text slides on a neutral background. For instance, an algebra teacher might start with integrating the Khan Academy lessons into a slide-show video window. Other items should run full screen, from a Youtube video clip of Japan’s surrender in a history classroom to playing slow-motion sequence of the I-35 bridge collapse in a forensic engineering seminar.

Each instance allows you to show, not tell. Of course, the pedagogically relevant item – be it the historical precedence, revolutionary timeline or the equations needed – have to be there, just not front and center. They can take a backseat to the visuals, which can make the lesson more impactful and memorable to students.

But, your choices of what to show shouldn’t be limited to live-action video. You can use an animated song about figures of speech in a writing seminar to show the foibles of student essays or show an animation sequence of how the earth’s crust has moved and changed over the last several billion years for a geology class. Be warned that to pull this off, you run the risk of taxing your imagination and creativity to the breaking point.

So too will the room’s projector. It not only needs to have enough resolution to show off the action in its best possible light but if you want to take this to its logical conclusion, you’ll need add in some interactivity as well.

While XGA and wide-XGA projectors remain the default resolutions in classroom projectors, they’re not enough anymore. This is particularly the case for videos and animation clips that were created at higher resolutions. Having full HD resolution at your disposal lets you show more detail and avoid pixilation and jagged lines that divert the class from the lesson.

The ultimate these days is a classroom that has a 4K resolution projector. With the ability to put up to 8-million pixels on screen, it has the ability to display several-times more detail. For some purposes, like fine art or medical classes, these ultra-precise projectors are de rigueur. For others, this extraordinary amount of imaging detail can be seen as overkill, but all of these projectors render HD material vividly.

Seeing may be believing but there’s nothing that can compare to actually doing. That’s where an interactive projector can help to teach. Here, a student can write directly onto the projected image with a digital marker or their fingers. It’s just as useful to highlight an area of a Vermeer painting as to show the 18th century slave trade routes with different colored arrows. These projectors also have the ability to save the marked up image for distribution after class.