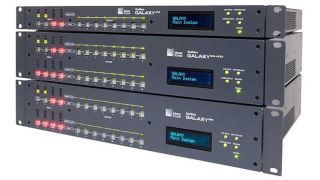 Meyer Sound has announced that its Galileo GALAXY network platform has been certified by the AVnu Alliance as fully compliant with the open AVB/TSN networking protocols developed through IEEE. AVnu certification assures consultants, system designers, and rental company operators that Meyer Sound systems based around GALAXY can be integrated into larger networked audio and video systems involving input, playback, and processing components from multiple manufacturers.

“GALAXY processors were designed from the outset to function as keystone components in the large-scale networked sound reinforcement systems of the future,” comments John McMahon, Meyer Sound’s vice president of solutions and strategy. “For over a decade the Galileo platform has won acceptance as the ‘go-to’ loudspeaker processing system, and now GALAXY’s AVnu certification ensures that these capabilities can be seamlessly integrated into networked systems encompassing the full spectrum of audio, video and show control functions.”

In order to receive AVnu certification, Galileo GALAXY was required to pass stringent testing procedures for seamless interoperability with other compatible AV systems based on the AVB/TSN (Audio Video Bridging and Time-Sensitive Networking) protocols. Some of the conformance testing was carried out in-house by Meyer Sound, with the rigorous final test procedures carried out by AVnu Alliance’s approved testing partner, the University of New Hampshire InterOperability Lab (UNH-IOL).