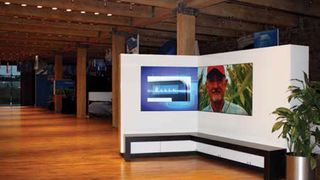 Owned by Brookfield Properties, 2 Queen Street East is a 20-story office tower in downtown Toronto, Ontario, Canada. Its tenants include several of the principle players in Canadian finance, and daily foot traffic in and out of the building is considerable. Local firm Forge Media + Design recently oversaw a refresh of the branding and signage for the tower, including the ground floor lobby.

Working with the lobby’s existing nautical theme, the Forge designers specified two 12-foot-tall displays that flank the entrance to the elevators. Made up of Christie MicroTiles, the displays project a wind and water-themed generative digital artwork entitled “Passage of Light”—a tranquil visual presence created to counter the hustle and bustle (and stress) of life in finance.

“People can look inside any time from the street—it’s like a fishbowl—so we took advantage of that and used the idea of attracting attention with color and light,” explained Laurence Roberts, principal at Forge Media + Design. “This is why we started with the concept of light passing across the top of water, giving an open sky-like image, and the shift of hues that transpire over the course of the day.” A blending of custom gradients means that viewers will never see the same set of colors twice. A fractal 3D mesh uses real-time wind data to create a feeling of movement. “Whenever the wind picks up, the form and oscillation of the wave will naturally increase.”

The lobby’s “fishbowl” aesthetic—punctuated by floor-to-ceiling storefront windows—mandated the need for a display solution that was capable of projecting a clean image in a brightly lit space. “The colors needed to be vibrant, but not sweet,” Roberts said. “There is a depth of color that comes with Christie MicroTiles, and they remain true even in bright light, unlike other displays. This was critical, because the MicroTiles are located in a sun-soaked area of the lobby.”

The challenge of finding an effective display solution for a brightly lit space is not unique to Forge’s project at 2 Queen Street East. Lobbies, boardrooms, classrooms, galleries, multiuse environments—any space where people need to watch presentations, make notes, or see where they’re going—all provide light-related issues when it comes to displays. Here are a few of the latest solutions on the market that address the need to project images and information in areas where the light is bright . . .

Spearheaded by American Ballet Theatre principal Daniil Simkin, “Falls the Shadow” was a 30-minute work made in and for the Solomon R. Guggenheim Museum rotunda in 2017. In real-time, dancers’ movements were captured by motion sensors, generating 3-D mapped visuals that were projected onto the surface of the rotunda to create an immersive experience that meshes technology, music, visuals, fashion, and dance.

Last summer, Barco’s UDX-4K32 laser phosphor projectors played a starring role in “We The People,” an art installation created by John MacInnes and Remington Scott for The Art of VR NY, a two-day expo hosted by Sotheby’s. The installation featured larger-than-life avatars, including an avatar of President Obama, and utilized facial tracking software to allow visitors to capture expressions and animate the computer-generated presidents’ heads in real time. Connected directly to the gaming engine behind this real-time animation, Barco’s UDX-4K32 projectors were employed to produce latency-free images on a large video screen. The projectors, which deliver up to 31,000 lumens of brightness, were specifically chosen because the space in which the exhibition was held—the Ocean Room at Sotheby’s in New York, N.Y.—has a high level of ambient lighting.

Operators working in command and control centers in transport and emergency operations agencies need to view the data that is displayed on video walls clearly, but they also need to see their desks—and each other. For these applications, Barco proposes the RGB Laser ODL-721 laser-lit rear projection video wall. And, for small to medium-sized spaces, Barco offers the F90, F80, and F70 projectors (which deliver between 7,000 to 13,000 lumens of brightness). Once again, their laser technology eliminates the worry of replacing bulbs.
www.barco.com

As mentioned, Christie’s MicroTiles are capable of maintaining color fidelity in environments with ambient light. Featuring built-in sensors that monitor the performance of each LED, the tiles self-calibrate, and adjust themselves to adjacent tiles to maintain color consistency. A one-millimeter seam between each tile makes for an almost seamless viewing experience, and their modular, “building block” design enables displays to be arranged in any configuration.
www.christiedigital.com

A model in the Epson PowerLite 2000 Series

Epson’s PowerLite 2000-Series features three new wireless, portable projectors designed for use in rooms with ambient lighting: the 2247U (4,200 lumens), 2142W (4,200 lumens), and 2042 (4,400 lumens). Featuring enterprise-level security, the models incorporate 3-chip technology and support wireless solutions such as MHL and HDMI, enabling users to project from their laptops, mobile devices, and streaming devices. Wireless screen mirroring from a smartphone or streaming device with Miracast is possible with both the 2247U and the 2142W. The 2142W and the 2247 deliver WXGA resolution, while the 2247U delivers WUXGA Full HD. The projectors have a lifespan of 12,000 hours in ECO Mode.
www.epson.com/projectors

Optoma has a number of projectors suited for ambient light environments, including the new 4K500 4K UHD. Delivering 5,000 lumens of brightness and 8.3 million pixels on screen, its contrast ratio is 1,200,000:1 (with Dynamic Black enabled). The 4K500 features several inputs including HDMI 2.0 with daisy chain support so that it may connect to multiple devices. The Optoma UHZ65 is a laser phosphor projector delivering 3840x2160 resolution (also 8.3 million pixels onscreen), 2,800 lumens of brightness and a contrast ratio of 1,500,000:1. The unit’s HDMI 2.0 and HDCP 2.2 connections enable the delivery of 18Gbps.
www.optoma.com

Designed for applications requiring high resolution with minimum maintenance, Sony’s VPLGTZ270 4K projector offers 5,000 lumens of brightness, a 20,000:1 contrast ratio, and can display a color gamut that approaches BT.2020. Its laser phosphor technology means that tech managers don’t have to worry about changing out bulbs, and the unit has a 20,000-hour lifespan. Also in this series is Sony’s VPL-GTZ280 4K projector, also lampless. This model will deliver 2,000 lumens of brightness, with options for attaining 5,000 lumens. Also optional are a 120Hz input and IR stimulation of NVG devices, making it suitable for simulation applications.
http://pro.sony.com