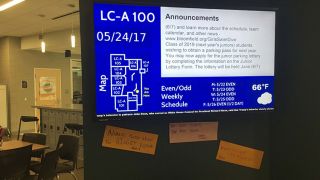 Bloomfield Hills Schools in the suburbs north of Detroit has long been a champion of professional AV technology, leveraging digital signage and other systems district-wide to engage students and enhance learning environments. The district recently upgraded its digital signage network to the latest Carousel Digital Signage Software platform from Tightrope Media Systems (Carousel 7.0), at once introducing new content playout capabilities while streamlining the creation and management process for network operators.

Bloomfield Hills Schools targets digital signage content to 34 displays in the high school alone, the majority of which serve specific learning communities. Each community receives content specifically targeted to its curriculum, while other displays around the high school – including five in the Media Center – and the district at large provide information about room schedules, school events and other messages pertinent to faculty, visitors and the larger student body.

The upgrade to Carousel 7.0 software has made life easier for the communications department, which is responsible for creating and disseminating most content. The streamlined workflow of Carousel 7.0 also simplifies these processes for operators working across a wider away of user devices.

“Carousel 7.0 also introduces a responsive user interface that has been extremely helpful,” continued Webster. “The high school campus includes 35 monitors over 340,000 square feet that I am responsible for maintaining. The new responsive interface means that I can open up and work on the signage output from my phone or a tablet; that flexibility extends to our communications department, which often must update content on the fly. There is no difference in the user experience regardless of what device is being used.”

The network is further enriched with the addition of the latest-generation BrightSign media players at each display. The exceptional processing power of BrightSign media players better accommodates live video playout and dynamic animations, livening the screens beyond what was previously possible. The BrightSign players also keep the bottom line manageable as the network scales due to a very cost-efficient price point.

“We also have a TV station at the High School with a full broadcast headend powered by Tightrope Cablecast Broadcast Automation, which is fully integrated with Carousel and our BrightSign players,” said Webster. “Using a Wowza Media server, I can take live video mixed with Carousel content through our production switcher, and send that to every display in the school simultaneously. We recently tested this for a football game, and were amazed at how many students and fans came inside to watch the game. We also have a radio station in the high school that replicates a live feed of what’s happening inside the on-air studio. It’s a big step up and we intend to do much more with video moving forward.”

Carousel’s rich data capabilities, which simplify integration with and management of a multitude of external data sources, remain an important focus for the school.

“We bring in a total of five RSS feeds with district news – one for our high school, one for our administration building and one for each of our three middle schools – and mix in weather and top stories from Yahoo, all of which circulates on a continuous news ticker,” said Webster. “Therefore, everyone can see the latest news throughout the day along with educational and entertainment content.”

Carousel 7.0 adds another valuable benefit for Webster though its automated channel changing and monitor control capabilities, which collectively preserves the display lifecycle, reduces electricity costs and introduces more dynamic content scheduling. On a typical day, Carousel turns on all displays to a white screen at 6am before switching to a normally scheduled content one hour later. Content plays until 11pm, when the displays switch back to a white screen until automatically shutting down at midnight.

“We have athletic venues and facilities that are open during different times, especially in the evenings, and we can easily schedule these displays to have Carousel change to a different channel,” said Webster. “We also are planning to add more interactive signage, including kiosks, in the schools, and build an IPTV network into the system that will add more live video channels. Using Carousel, we can automatically switch to these new live video channels at different times based on location and audience, such as providing school news in the cafeteria at lunchtime. And, there is a clear energy-efficient benefit to this new Carousel feature that extends the life of these monitors for as long as possible. That’s imperative to maximizing our investment given that we have more than 40 monitors across the district, with more to be added in the future.”