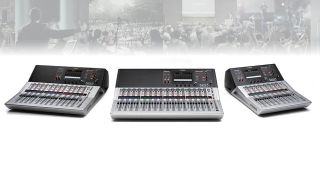 Yamaha has released a firmware update for the company’s TF series digital mixers with TouchFlow Operation, bringing with it expanded audio networking capability. The company has also released a version 4.1 update for its CL and QL digital consoles, adding new Dante functionality including support for the AES67 interoperability that allows communication with Ravenna, Q-LAN, Livewire, and other audio networks for improved system expandability.

The new firmware for the TF Series—version 3.1—allows the consoles and the recently released TF-RACK equipped with an NY64-D Dante interface card to connect to audio networks, such as Ravenna, that support the AES67 audio-over-IP interoperability standard.

With this new firmware update, AES67 compatibility will allow Dante to communicate with a variety of other AES67-compatible audio networks for enhanced system flexibility.

“The new v3.1 update adds AES67 support to our TF series mixers, continuing the process that began with updates for the CL/QL series mixers and R series I/O units,” said Nithin Cherian, marketing manager, MI Pro Audio, Yamaha Corporation of America. “This will allow TF mixers to connect to Ravenna networks in live sound and other applications where they are already popular, further enhancing their versatility and value to our customers.”

In addition to the expanded networking capability in the firmware update for the CL and QL series consoles, the number of supported Shure Wireless Receivers has also increased. Version 4.0 provided support for the ULXD4D and ULXD4Q. Version 4.1 additionally supports non-Dante devices including the AXT400, QLXD4, and ULXD4. Control and monitoring are supported for all devices, plus transmitter gain control for the AXT400. Yamaha CL and QL 4.1 marks the fourth stage the Yamaha and Shure collaboration since 2013.

“We are always trying to continually improve the overall customer experience with our products,” said Rob Fuhlbrugge, senior director of engineering and product development at Shure. “The ability to monitor and control all Shure networked wireless products including Axient, ULXD, and QLXD from Yamaha CL and QL consoles allows this monitoring and control functionality to be available for a larger number of customers.”

“Connectivity with third-party products is just as important as the reliability and performance of Yamaha digital consoles,” said Marc Lopez, director of marketing, CA products, Yamaha Professional Audio. “The software updates for CL and QL in Version 4.1 focuses primarily on AES67 support and interoperability with other devices in a field where the consoles have already become standard. The improved functionality provided will be a valuable creative asset for our customers.”