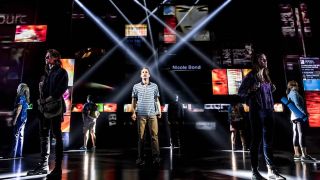 WorldStage has provided an extensive media-server driven video package for the Broadway musical, Dear Evan Hansen, which relies on the technology to tell the story of a high school senior coping with social anxiety disorder. It is currently playing to packed houses at the Music Box Theatre, but WorldStage supported the show’s initial Arena Stage production in Washington, DC as well as its Off-Broadway run.

“Everywhere you look there is video: Every surface of the entire playing space can be covered by content whether projection or LCDs,” said projection designer Peter Nigrini. Display surfaces comprise a front projection system, a series of portals and tracking panels, flat-panel LCD monitors, and the stage floor.

“The cornerstone is Evan and his interaction with the real world through a social media lens,” Nigrini explained. “To successfully tell our story, social media needed to be a visceral part of the theatrical environment. After the set designer created the physical environment, my job was to bring this virtual world to life on stage and give it the emotional power that so many teenagers clearly feel in their interactions with social media.”

To achieve Nigrini’s look for the social media environment, WorldStage utilized d3 media servers from d3 Technologies. WorldStage also supplied Panasonic PT-DZ21K projectors as well as Panasonic PT-RZ12K laser-phosphor projectors; and a pair of Panasonic pan-tilt-zoom cameras, which are used to create live interactions on stage. The d3 systems also feed video to several dozen 32- and 40-inch LCD monitors and are connected to the automation computer for tracking moving scenery.

“It’s an unusually large system with a lot of video signal management and we used a number of tricks to provide additional high-resolution outputs from the same number of server channels,” said WorldStage account executive Lars Pedersen. “It’s a complicated approach but provides the production with great bang for their budget dollars.”

Nigrini agreed that the production is “ferociously complex—an incredibly complicated machine. There are so many moving parts both real and virtual; d3 tracks 28 points of automation and the show content tops out at just under a terabyte.”

He calls WorldStage “old friends, a trusted resource with a real understanding of the theatrical process. It’s unusual for a video house to understand the nuts and bolts of theater. We work in small rooms, in miniature, so the tolerances for fit and finish are very high. WorldStage understands the levels of detail and complexity that go into a Broadway show and that I expect in anything that carries my name.”

Nigrini believes d3 is “an essential part of the tool kit” for Dear Evan Hansen. “The days when we could think of projection as a 2D art are over, and d3 allows me to have content fall into the three-dimensional stage and move in a seemingly organic way,” he said. “There are so many little bits of video in the show; the d3 system understands where all the moving parts are and allows me to place content with an incredible level of detail—the fact that I can put the right fragment of video in exactly the right space at the right time is amazing.”

Nigrini noted that WorldStage began work on the production two and a half years ago in Washington. “It’s a long process to become a hit Broadway musical,” he said. “WorldStage is great at understanding that it’s a long, long game.

“The design of the show has grown a fair amount over time, but the core of the system has remained constant,” he pointed out. “My collaboration with World Stage to get the system right from the day one keeps us all focused on the real mission, the technology has to be in the service of the content. The fact that we have moved this show to three different venues that have three different scales is a testament to the expertise WorldStage has provided.”

Nigrini enjoys what he calls WorldStage’s “willingness to go down the road on my mad science projects. The great luxury I have as a designer is to sit in my studio and think things up; then I call WorldStage and say, ‘I want to do this,’ and there’s a team willing to pick up the ball and run. It’s great fun to have super-smart people take my crackpot idea and make it work.”

He believes that Dear Evan Hansen is “revolutionary” for its ability to utilize “human beings, video, and projection elements to tell a story” that theatergoers obviously connect with. “WorldStage is our partner in that.”

At WorldStage, Tom Whipple is the project manager for the show and Alex Bright the media server technician.