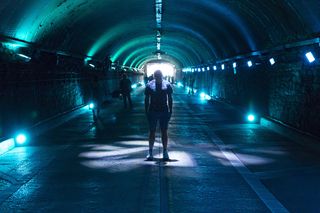 Jana Winderen's sound installation, "Dive" using WorldStage audio and lighting support to transform the NY tunnel“The tunnel is such a challenging space” says Emily Colasacco, director of urban art/Summer Streets at NYCDOT. “The exhibit was from 7 am to 1 pm on three Saturdays in August and had to be set up overnight and disassembled in the afternoon to open the tunnel back up to vehicular traffic. Then there was the additional challenge of how to create an intense sound piece in a space that echoes. We had to balance that intensity with allowing participants to talk.”

Jana Winderen has worked as an artist, curator and producer since 1993. She has researched the hidden depths of the world using technology to reveal the complexity and strangeness of the unseen world beneath. She focuses on finding and revealing sounds from otherwise inaudible natural habitats and creatures.

The subterranean tunnel was a perfect venue for “Dive,” which featured sounds of crustaceans, fish and mammals recorded by Winderen in shallow to deep underwater environments from Greenland to Thailand and beyond. Those sounds mixed with lapping waves and man-made noises from boats and seal-scaring devices. The public explored eight habitats of sound diving deeper and deeper into the tunnel, which was bathed in evocative blue light.

“We are not used to listening underwater,” says Winderen, “so this offered a new and unique experience in a very special place. The space gave people room for concentrated listening. When I saw the tunnel I thought it was a great way to dive into the unknown.”

The artist says that it made sense to partner with WorldStage on the project “because they had the experience” of working in the tunnel last year. “They knew how to bring in power and [deal with] security issues. They knew how to help solve problems and make my ideas a reality.”

“WorldStage set up a demo room and an 25% scale mock-up in their New Jersey shop where I could work with the sound files and Tony did tests,” says Winderen.

“WorldStage came up with a blue light that worked – that was the right color and intensity,” says Colasacco. “Light was there to support the sound and reflect diving underwater and going deeper and deeper. Although the lighting was static it varied slightly in color.”

Terry Jackson, WorldStage vice president/director of lighting, says the company “definitely didn’t want to mimic last year’s tunnel lighting so we lit the installation with all LED fixtures and played with intensity, slight movement, fixture placement and color – all while maintaining the NYCDOT-approved level of light for general public safety.”