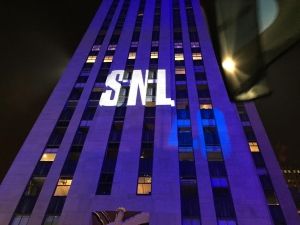 A projection of the SNL logo on the Rockefeller Center.
“When ‘SNL’ began it was revolutionary, and the production pioneered some of the most sophisticated audio and lighting techniques to support a live telecast,” said WorldStage president Josh Weisberg. “The way they handled audio and the band, the way they worked with guests – it was all different from any other show. Back in early eighties, when we were called Scharff Communications, our audio rental department provided the latest digital audio gear – this was when a 24-track machine weighed 300 lbs – and the latest wireless microphones. The technology has changed but the progressive spirit of the show has not, which is wonderful.”

With a 36-year history of supporting “SNL,” “It was great to be there with them to mark their 40th anniversary,” Weisberg said. For the 60-minute “SNL 40th Red Carpet Live” show, hosted by Matt Lauer, Savannah Guthrie, Carson Daly, and Al Roker from Rockefeller Plaza, WorldStage provided two U3 3.75mm videowalls plus lighting for the host positions. WorldStage recently made a big investment in U3 display technology, purchasing more than 700 tiles for its inventory.

Gray Matter Visual was tasked with designing and coordinating the red carpet and décor lighting. “WorldStage provided us with an all-LED solution for the red carpet along with additional fixtures for decor lighting,” said designer Brendan Gray. “The project came together quickly, and Drew DeCorleto and the rest of the WorldStage team provided great support as always. Their familiarity with NBC and the venue was also an asset.”

Lighting designer Alan Adelman said WorldStage also helped with some exterior venue lighting. “We were asked to light the exterior of 30 Rockefeller Center on Friday for a set up on Saturday. WorldStage provided gear, labor, custom gobos and 200 amps of power and coordinated with NBC for access to the building across the way.”