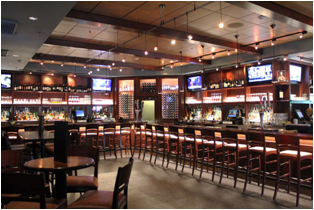 After the owners of the New Jersey-based restaurant group Delicious Heights learned how easy it was to manage their restaurant’s audio and video with the ELAN g! Entertainment and Control System in one restaurant, they decided to upgrade their Berkeley Heights, NJ flagship location to ELAN g! as well.

The switch to ELAN g! was coincident with an expansion of the restaurant that added a 24-seat private dining room with two wall-mounted 37-inch Panasonic LCD TVs as well as room for 3 additional tables, eight feet of bar space, one POS terminal and one new Samsung thin-bezel 37-inch LCD TV all in the main bar area. The private dining room even has its own iPod dock and VGA input so private parties can show videos on the TVs and listen to music from their own iPods or iPhones.

According to Carl Sciarrone, the project manager for renovations at both restaurant locations, 360 Media Innovations and ELAN g! were his only choice for the second location. “After working with 360 and seeing what they could do with the ELAN g! system, I knew we’d be working together again soon. Having the same system at both locations is ideal, because the owners can easily monitor everything from their iPhones. I can definitely see them integrating the lighting, security and HVAC in the future.”

The restaurant’s ELAN g! Entertainment and Control System includes an ELAN TS10 touch screen at the main bar, iPhone and iPad control, and one point-of-sale terminal (POS) with the g! control interface. Each interface device provides a live video preview function that lets the user see what is currently playing on each video source, in real time, before sending the signal to a TV. This makes it easy for the manager to change to the right video source.

Currently, the g! system manages the audio and video for Delicious Heights, and can be expanded in the future to integrate control of the restaurant’s security, surveillance, HVAC and lighting systems.

"With ELAN g! we definitely write far more orders and far less code and that has made all the difference to the growth of our business," said Gale. "It’s staggering.”