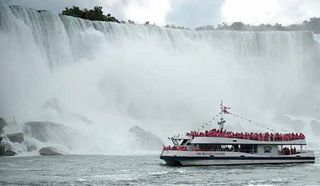 WEATHERPROOF LOUDSPEAKERS TAKE EVERYTHING NIAGARA FALLS SPRAYS AT THEM

Hornblower Cruises recently outfitted two new catamaran boats with new One Systems sound reinforcement systems to accommodate the regular tours of Niagara Falls, as well as special events that the company offers. NIAGARA FALLS, ONTARIO, CANADA—Experiencing the power of Niagara Falls from a boat is breathtaking. The sheer power of the water and mist is one of the wonders of the world.

Hornblower Cruises recently received exclusive rights to operate Niagara Falls boat tours from the Canadian side of the falls. Two new 700-passenger, catamaran boats take passengers on the “Voyage To The Falls” which includes a journey past the American Falls, Bridal Veil Falls, and into the very heart of the famous Horseshoe Falls.

During each tour, the poncho-equipped passengers are treated to an audio presentation that covers the history and background of the area and music playback during their journey. To ensure that every customer receives the best experience possible, Hornblower Cruises installed new sound reinforcement systems in each boat to accommodate the regular tours as well as special events that the company offers.

Design Electronics, located in Niagara Falls, Ontario, Canada, has a long history of installing and maintaining audio systems used on the Niagara cruises. As a result, they were brought in to assist with the system design for the new Hornblower boats. Working with a base design and specification created by the U.S.-based Hornblower AV department, they were tasked with putting together a system that would meet the current and future needs of the Niagara Falls organization, as well as one that could survive the rigors of the elements.

“It’s an incredibly harsh environment—that will put any weatherproof speaker to the test,” explained Lorne Bjorgan, president of Design Electronics. “We’ve been doing this for a while and have hands on experience with the equipment that can survive the kind of extremes that the Falls will subject them to. A lot of manufacturers call their equipment outdoor and weatherproof, but you’d be amazed at how quickly some loudspeaker components can decay, especially when installed near 150K gallons of falling water per second.”

Given their experience, Design Electronics recommended One Systems direct weather loudspeakers for the job. The distributed 70-volt system consists of 38 One Systems 103IM high performance loudspeakers powered by Lab.gruppen amplifiers. System control is provided via a Rane HAL2 system.

“One Systems loudspeakers not only have the required IP rating but also sound terrific and are built to last,” added Bjorgan. “The distributed system is primarily used for the tour presentation and music playback, but had to be able to handle music for dinner tours, weddings and other special events. It was the perfect solution for this application.”

The main level of each boat features a covered outdoor observation deck and a central enclosed room for those seeking protection from the elements. Stairs provide access to an open observation deck on the second level.

The majority of the 38 103IM loudspeakers are bracket mounted throughout the main level to cover passengers on the open deck and in the enclosed seating area. The low ceiling height and a desire to keep the views as un-obstructed as possible made the compact, eight- by six- by five-inch enclosures a perfect fit.

“It is always surprising how loud the Falls themselves are,” Bjorgan continued. “The distributed system blankets the lower level with solid, intelligible coverage so folks can hear the presentation.”

Additional 103IM loudspeakers along with Community Professional R-Series loudspeakers are bracket-mounted on the mast to cover the open observation areas on both levels.

“HAL has very advanced features such as matrix mixing and presets for room combining and paging,” Bjorgan said. “We needed a straightforward solution and HAL does exactly what is needed.”

Both of the Hornblower boats launched in April of 2014 and have not stopped going since then. Bjorgan noted that One Systems and its Canadian distributor, Contact Distribution, were integral to getting the components delivered so they could be installed within a tight time frame. According to Bjorgan, the organization is very pleased with the end result.

“The company has a lot of plans for the future with these boats,” Bjorgan concluded. “The system is designed to grow with them. These components will still be going strong five years from now.”