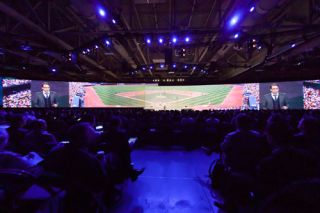 The Keynote Room featured two overlapping, curved main screens with a nine-foot offset to allow presenter egress to the stage, while maintaining a continuous image across 234 feet of screen area. The curved screen at house left measured 124 feet wide and the curved screen at house right 110 feet with the total video area comprising 4,500 square feet and 14,515, 200 pixels.

“The projection combined with the content made for an impressive sight,” said WorldStage account executive & VP of Prod. Services Richard Bevan. “Since the screens were so wide, the speaker support content was 3840x1080 and was pip’d on each of the wide screens. We used Pandora’s Box media servers for playback and had seven streams of HD content going to the wide screens via two Vista System Spyder X20s in expanded mode. Pandora’s Box supplied full screen playback and the backgrounds and animations for content appearing in windows within the screens and the IMAG windows as well.”

In addition to the main screens, three 16x9 delay screens were positioned in the audience. Cabling to the projectors, including six projectors dedicated to the delay screens, totaled 5.1 miles. WorldStage installed all of the projectors and cabling in 16 hours, which included unloading time, to be ready for the first tech run-through at midday on the second day of load in.

WorldStage also furnished the event’s audio equipment providing nine clusters of JBL VERTEC and VRX line array clusters for the Keynote Room with an audience of 6,000.

“Our WorldStage crew has worked together so long that we just nodded to each other and knew what needed to be done,” said projectionist Terry Nakamura. “The show was so complex and the time to install it was basically only one day, but our team remained very mellow.

“WorldStage and The Kenwood Group worked so closely together that we acted as one big company to pull off a difficult assignment,” he adds.

At The Kenwood Group Web Burrell was the senior producer, Daniel Pinkham the senior creative director and Wayne Leonard the executive producer.