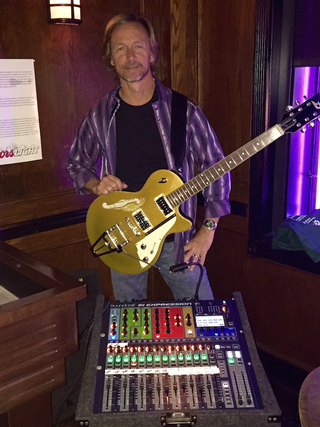 Steve Jaworowski with his Soundcraft Si Expression 1 digital console
Throughout their history, Vavoom and Breakdown relied on analog consoles. Upgrading to the Si Expression 1 console allowed the band members to transport less outboard equipment from venue to venue.

“At first I was a little nervous about the motorized faders, but everything worked out, and I like all the features that come with this board,” said Jaworowski. “For example, I really like the Soundcraft FaderGlowTM lighting when mixing in the dark. Choosing the Si Expression 1 was not a hard decision, because there weren’t too many boards in this price range with all the features that I want.”

As an experienced engineer/musician, Jaworowski also likes to use the Soundcraft ViSi Remote 2.1 iPad app to set up sound within the audience for sound checks, eliminating the need for transitioning on and off the stage. The full band mix consists of one house and two monitor mixes, which Jaworowski is now able to control from the same console.