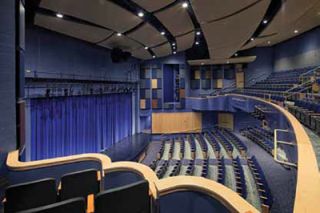 The main theater is configured as a mono cluster of two EAW loudspeakers, a Yamaha 1218 subwoofer, under-balcony Yamaha IF2205 fill speakers, a comprehensive monitor system, and a hearing loop that can take as its source a pair of ambient microphones or a direct line from the Yamaha digital console. The new Weber Center for the Performing Arts in La Crosse, WI is a dream come true, not only for the residents of the Mississippi River city, but also for the two institutions that partnered to build the $8 million facility.

The La Crosse Community Theatre endured the cramped and ill-suited conditions of its previous space while theater and performing arts students at Viterbo University put up with rehearsals in hallways and other inconveniences not befitting so prestigious a liberal arts institution. Beyond a spacious lobby, patrons will now find a 450-seat main theater with ideal sightlines and a versatile 100-seat black box theater, which features a sound system designed and installed by Commercial AV Systems of nearby Onalaska, WI to achieve maximum flexibility and accommodate future expansion on a very tight budget.

“We designed the system so that you can essentially route audio from anywhere to anywhere,” said Ryan Van Berkum, the commercial AV systems project manager who designed and oversaw the installation of the new system. “Nothing is hard-patched—Dante takes care of everything.”

Split between the two performance spaces, four Symetrix SymNet Radius 12x8 processors at the Weber Center effectively behave as one large custom processor because they communicate via Dante. Together, they also handle the routing logic for nine zones of paging. Like the Dante-based SymNet Edge system, the Radius 12x8 is configured using SymNet Composer open architecture software.

Eight channels of audio can flow simultaneously between the two performance spaces in overflow situations. In addition, the community theatre and school both anticipate scenarios where one performance space may serve as a prop room or dressing room for the other. By allowing audio to flow between them, critical cues and other information will not be missed.

The sound system in the new Weber Center for the Performing Arts in La Crosse, WI is designed and installed
around four Symetrix SymNet Radius 12x8 processors. The main theater is configured as a mono cluster of two EAW loudspeakers, a Yamaha 1218 subwoofer, under-balcony Yamaha IF2205 fill speakers, a comprehensive monitor system, and a hearing loop that can take as its source a pair of ambient microphones or a direct line from the Yamaha digital console. The console is outfitted with two Dante network cards, one for transfer of signal to the SymNet Radius 12x8 system and one for transfer to a Yamaha digital stage box. In addition, a presentation mode in the main theater supports four input channels—mic, line, or audio from a direct box.

The black box theater makes use of the theaters’ existing Allen & Heath console. A fixed Yamaha IS1118 subwoofer provides low-end support in either full-range or discrete mode. The presentation mode has similar behavior and channel count as the main theater, simplifying training requirements for staff and volunteers while facilitating use of the black box space for simple events without a tech on hand.

The La Crosse Community Theatre will kick off its new season in the Weber Center for the Performing Arts with the comedy Noises Off. The students of Viterbo University will break it in with a performance of Little Women – The Broadway Musical.