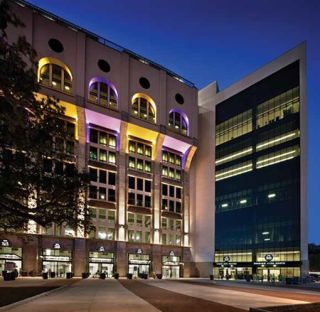 “Death Valley” is the local nickname for Louisiana State University’s Tiger Stadium in Baton Rouge LA. This is because Tiger Stadium is a very stressful place for visiting NCAA football teams playing against the LSU Tigers, because of the Tigers’ string of championship titles and the fans’ legendary enthusiasm.

“Baton Rouge happens to be the worst place in the world for a visiting team: It’s like being inside a drum,” said University of Alabama Paul ‘Bear’ Bryant. “Unfair is playing LSU on a Saturday night in Baton Rouge,” quipped former Arkansas governor Mike Huckabee.

As designed by BAi of Austin, TX, and built by PSX Worldwide Audiovisual (PSX) of Covington LA, Tiger Stadium’s South end zone expansion “is one where you never lose track of what’s happening on the field, because there are literally TV monitors everywhere you turn,” said Edward Vigueira, PSX’s CTS-certified Sr. Engineer/Project Manager. “This is how extensive the new AV installation is.”

“New in-house HD channels were combined with Tiger Stadium’s existing house and local clear- QAM channels to serve 240 new displays overall,” said Vigueira. “These are a mix of Samsung and Sharp HD displays ranging in size from 40- to 80-inch diagonal.”

The first two levels of the south end zone expansion are dedicated to Tiger Stadium’s 72 new executive suites and outdoor Club seating. Modeled after the suites already in place in the stadium’s East and West stands, these luxury rooms feature inside/outdoor seating plus all the amenities necessary for a catered day (or night) at the game.

“Each suite has two Samsung monitors; a 55-inch inside and a 40-inch outside under the stand’s overhang,” Vigueira said. “Every suite also has its own QSC TSC-3 touch panel that provides audio program choice and level/mute control.” TV audio, PA feed, FM radio broadcast, or an aux feed are available through the suite’s sound system. Community D6 ceiling speakers provide audio inside the room, while Community DS8 models provide a delayed bowl signal to the exterior suite seating.

Tiger Stadium’s South End Zone suites are located on the inside of this area’s U-shaped structure. The outer part of the ‘U’ is home to a large access hallway on each floor. Restrooms in this area are outfitted with 40-inch displays, and the main elevator lobby and small gathering areas here are also outfitted with various sized displays so that fans never miss any of the action.

In the center of each hallway area is a large lounge fitted with six large displays. All of the lounge area displays are on both levels are fed by a Crestron DigitalMedia 16x16 local video distribution system and a number of dedicated cable receivers. “This allows the suite holders to access PPV and encrypted programming when necessary,” said Vigueira.

Wall-mounted Crestron DM-TX series transmitters and dedicated touch panels are located in the lounge areas, so that local A/V sources can be used when presentations are being staged in these large spaces. The lounges are also equipped with mic and line jacks to access the audio system.

The third floor is home to Tiger’s Stadium’s new Club level. “This is a vast 13,500 square foot area with 24-foot high ceilings and panoramic views of the campus. Club members and large groups can enjoy food and drinks here during the game,” said Ed Vigueira. Samsung and Sharp monitors of various sizes abound in the Club level, from 40-inch TVs in the restrooms to 80-inch displays on the walls.

As in the Suite Lounge areas, the Club Dining area employs a Crestron DigitalMedia system to feed local inputs or cable receivers to selected displays. Mic and line inputs are also distributed through this area; a local CD player, FM tuner, and iPod input are provided here as well. Sound comes from Community D6 and D8 ceiling speakers, with a Crestron touch panel and two QSC TSC-3 touch panels providing system control on this floor.

A job as big as Tiger Stadium’s south end zone expansion—240 monitors and 600 speakers—would be a big challenge under any circumstances. But PSX had to execute the installation under a tight schedule as stressful as a Two-Minute Warning during a tied Super Bowl.

“We started work in mid-April 2014, when the contractors were still working on the south end zone expansion’s physical structure,” said Vigueira. “We had to be completely done, one way or another, by the time the 2014-2015 season opened on September 6th—no exceptions or delays allowed.” As a result, PSX installers were pulling wire while the other trades were getting the plumbing in place and putting up drywall. “We had to coordinate tightly with all of the trades involved every hour of every day so that we could all hit the mark on time. Communication at every step was critical,” he said.

Unfortunately, electronics do not respect schedules. In this case, 16 of the monitors within the suites showed signs of signal interference—even though PSX’s technicians had been extremely careful in laying out the various cable paths. “Fortunately, we managed to eliminate the issue by installing Jensen VRD-1FF CATV isolators in line between the head-end and the monitors in question,” Vigueira said. “These solved the noise problem just like that: They were very handy.”

Mounting the speakers and outdoor monitors in the second level of the Tiger Den suites’ outdoor seating was also a problem: “The suites’ exterior walls and doors are all glass, and there was only about ¼-inch space on each side to roll out a manlift,” Vigueira said. “The last thing one wants to do is crack a $5,000 glass door during installation!”

“Compounding that issue was that the distance from the second-level seating to the third deck mounting area above was 18 feet, and the potential for falls into the bowl area created a big safety risk,” he added. “Since we couldn’t use stepladders or manlifts safely, we had to have scaffolding erected underneath each speaker and display. It was much too high and too dangerous to do it any other way.”

LSU Tiger Stadium’s South end zone expansion “is one where you never lose track of what’s happening on the field, because there are literally TV monitors everywhere you turn.” SURVIVING DEATH VALLEY

Despite the tight timeline, PSX Worldwide Audiovisual Technologies scored a touchdown by finishing the Tiger Stadium installation on time — just. “There was no time for a soft launch,” said Ed Vigueira. “We had to kick everything into operation on Opening Night, September 6th. The AV all had to work—and it did.”

A record-breaking 100,000+ fans packed Tiger Stadium that Saturday night, including in the justfinished South end zone expansion. The sold-out LSU crowd got to see the Tigers humiliate the visiting Sam Houston State Bearkats with a 56-0 shutout; a score better suited to basketball than NCAA football.

James Careless, based in Ottawa, is a regular contributor to AV Technology magazine.