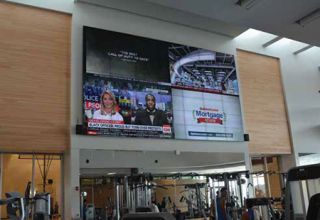 The University of California, Riverside’s new student center includes a seven-by-seven 28.5-foot video wall, consisting of 49 Barco 55-inch LCD displays aligned and hung using Peerless-AV’s DS-VW755S full service thin video wall mount with quick release. In early 2014, the University of California, Riverside (UCR) was putting the finishing touches on its new student center, the UCR Student Recreation Center, a building planned as the hub of recreational, intramural, and club sports on the campus. From health classes to casual sports games to personal training and even a rock climbing wall, the 80,000 square foot facility was jam-packed with everything the campus could possibility need to fulfill students’ wants and needs—except for one thing.

The university needed to find a way to showcase school events, share news, stream sports games, and more in a visually appealing, high-tech format, in line with the aesthetic of the brand new state-of-the-art center.

Having dreamed of the possibility of a media system, the university sent out a request for quotation (RFQ) and High-Tech Electric answered the call. The solution presented was a large seven-by-seven, 28.5-foot video wall, consisting of 49 Barco 55-inch LCD displays aligned and hung using Peerless-AV’s DS-VW755S full service thin video wall mount with quick release.

Due to the various and changing needs of the UCR Student Recreation Center, the new wall would incorporate a variety of tuners from Contemporary Research to stream 16 channels and content from a Panasonic Blu-ray player, along with displaying large still images to share major campus news.

One of the challenges of providing this solution was the space designated to house equipment. Many of the components had to be assembled and prepared a far distance from the actual wall, using remote power supplies.

One of the challenges of providing this solution was the space designated to house equipment. Many of the components had to be assembled and prepared a far distance from the actual wall, using remote power supplies. To reduce weight and spatial constraints, the power supplies were also pulled out of the displays and rack-mounted along with media players in a separate, temperature-controlled room with low voltage cables running to the displays. Middle Atlantic Products provided the racks for the project. This resulted in less heat near the displays and less weight on the mounts.

An Extron Electronics touchpanel created in the control room allowed for the university to easily control the configuration of the screens, from one full screen to four mini screens and beyond, to showcase a variety of news and sporting events.

With the video wall starting at 13 feet off the ground, with a peak height of 40 feet, Peerless-AV’s DS-VW755S Full Service Thin Video Wall Mount was a crucial component of the success of the install.

The mount allowed installers to align displays and negated tedious calculations and onsite guesswork through its reusable display-dedicated wall plate spacers. While most mounts on the market require the use of tools, the DS-VW755S offers simple, tool-less micro adjustments at eight points.

Most importantly for this install, the mount’s quick release function allowed installers to gain easy access to the back of displays. The DS-VW755S can also extend into a negative tilt position for ease of cabling. Both of these features were key in the installation of a video wall from a lift.

“This project consisted of so many industry firsts—it was scary to make it all happen, but that’s what you have to do to get the latest and greatest,” said James Gulke of High-Tech Electric, who led the project.

The installation was a success for all parties involved, but most importantly, for the UCR Student Recreation Center. Today, the video wall serves the more than 21,000 students at University of California, Riverside, on a daily basis—from entertaining to encouraging school pride, sharing news, school events, streaming sports games, and more—all in 13K resolution.