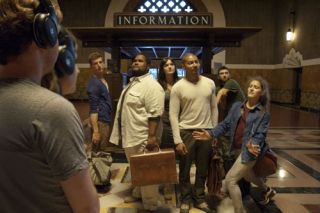 The Invisible Cities opera, written by Christopher Cerrone and based on the 1972 novel by Italo Calvino, combines historical fiction with surrealist elements to create an 'invisible opera for wireless headphones'. The opera's narrative, which centers on explorer Marco Polo's descriptions of fantastical cities to Emperor Kublai Khan, transforms Calvino's novel into a unique experience for each participant — combining a classic art form with modern technology. By using wireless headphones from Sennheiser, audience members will be connected to the storyline, while having the ability to roam freely as the opera moves throughout the terminal.

"Art-making is not just about great ideas but about ingenious execution — making a vision something real," said Yuval Sharon, artistic director, The Industry. This production would not exist without Sennheiser’s commitment to make this a magical experience for audiences."

"Our world is characterized by fast-paced, interactive communication and consumers seek experiences that touch them on a much deeper and more meaningful level. Invisible Cities caters to this desire and delivers an innovative performance to its audience,” said Stefanie Reichert, director strategic marketing, Sennheiser. “We have worked in close cooperation with Sennheiser global relations, including project manager Kristy Jo Winkler, to make this a seamless experience for the entire audience. Invisible Cities showcases how technology and artistic vision drive innovation in the arts.”

While Invisible Cities is an opera at its essence, it is unconventional in many ways. For example, there is no opera house and no assigned seats — audience members are not restricted in their movement and encouraged to roam freely. Also, whereas audience members at a conventional opera typically rely solely on natural building acoustics to hear an operatic production, Invisible Cities will utilize Sennheiser's wireless technology to convey both dialogue and music to listeners. Performers will be outfitted with Sennheiser wireless microphones and attendees will use Sennheiser's RS 120 wireless consumer headphones for a complete audio experience.

At the heart of Invisible Cities' technical production will be Sennheiser's Digital 9000 wireless system. An 11-piece orchestra consisting of strings, brass and percussion will perform an original score and will be miked using a selection of Sennheiser and Neumann microphones. Singers, dancers and performers in the production will also be outfitted with Sennheiser wireless microphones, and will be able to listen to their performances and director cues using Sennheiser's in-ear monitoring system (IEMs). The performance audio will be sent to a multi-channel digital console, where it will be mixed and broadcast via wireless RF technology to attending patrons, each of whom will be donning Sennheiser wireless headphones.

Bexel, based in Burbank, Calif., custom-built a Managed Antenna System (MAS) that allows for extended coverage of Sennheiser’s wireless microphones, in-ear monitors and headsets.
On the audio side, Bexel also supported Sennheiser’s microphones with a DiGiCo SD11 paired with a DiGiCo D-Rack. The orchestra, located approximately 1,000 feet from the main hall, is connected via fiber. The DiGiCo system allows the audio mixer to control the mic preamp from that distance.