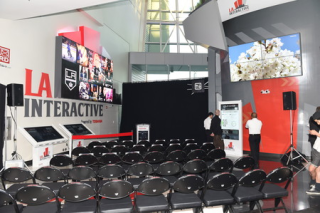 “The Los Angeles Kings and Clippers each have diverse and eclectic fan bases that share one thing strongly – their commitment and incredible passion for their favorite sports teams,” said Zeidman. “The ability to bring like-minded fans together enhances the experience before, during, and after games, and allows fans to reconnect with old friends or meet new ones in a comfortable, energizing environment within this new space on our main concourse.”

The Toshiba technology gives fans an interactive experience created through video displays
We are thrilled to partner with AEG, the Los Angeles Kings and STAPLES Center to provide their fan bases with the technology that has brought people together for seven decades,” said Maccabe. “Our goal is to give them an experience they won’t get at another arena.”

“On the heels of our second Stanley Cup Championship in three years, we have a more committed and energized fan base than ever, and bringing those fans together in person is something that I am particularly proud of going into this next season,” said Robitaille.

“Toshiba has made this tangibly possible with this unique digital destination, and I am pleased to be able to embrace and enhance the hallmark camaraderie that continues to be a cornerstone of the LA Kings.”