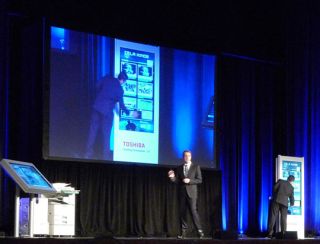 Toshiba, well-know in the consumer electronic, managed print services, and POS arenas, and somewhat active in recent years in the pro AV space with large LED walls and LCD panels, has been busy of late re-energizing their digital signage offerings. But Toshiba is taking a different tack with their latest efforts– steering away from just selling AV/digital signage hardware to end users or AV dealers/integrators and instead focusing on offering turnkey digital signage solutions and digital signage managed services.

The first salvo fired by Toshiba this fall came when they announced that Staples Center in Los Angeles was rolling out a new digital signage and fan interaction area. Prior to a Saturday night Los Angeles Kings and Vancouver Canucks NHL face-off, AEG, the Kings, STAPLES Center, and Toshiba held a ribbon-cutting event on November 8th to commemorate the opening of the venue’s new “fan destination, LA Interactive powered by Toshiba.” LA Interactive powered by Toshiba – located on the main concourse of STAPLES Center was designed “to enhance the fan experience with exclusive interactive content, social media visualizations, live game action, player stats, game scores, out of town action and more.”

The STAPLES Center is one of the major venues whose AV is managed by AEG. Others include offerings for the L.A. Galaxy, the Houston Dynamo, U.S. Soccer, and the Manchaster Monarchs. (AEG is also involved in entertainment production, for live events such as the New Orleans Jazz & Heritage Festival, and Coachella.)

Note that the LED wall at the new STAPLES Center is a product from D3. Toshiba has partnered with D3– an independent and well known provider of large scale LED walls for many Times Square and other large-venue and outdoor LED applications. Toshiba had been offering their own LED walls over the past few years, but they’ve gotten out of that and are now using partners to provide these to customers. And Toshiba is following a similar model for LCD panels. Like all the big Japanese manufacturers Toshiba offered their own LCD flat panels for years– but like most manufacturers they discovered the harsh lessons of commoditization and got out of manufacturing LCD panels themselves. Currently, Toshiba is leaving open the possibility of using their own LCD panels again but they are more focused now on the other pieces of the digital signage puzzle, and work with partners to provide LCD panels for solutions they are selling in the market.

All this culminated in a successful, well-attended user conference last week in Dallas– Toshiba’s LEAD 2014 Conference from Nov. 10-12 at the Gaylord Texan. Toshiba's LEAD conference brought together a good mix of (and good number of– over 600) digital signage and managed print service end users, dealers, and even content providers– so it was not your typical industry event. In fact, Toshiba told attendees at the conference that it was quite open about the fact that is pursuing a dual-track marketing strategy: selling digital signage solutions directly to some customers (remember Toshiba has a huge base of customers for managed print and retail POS), and going through the pro AV channel– AV dealers and integrators– to grow the market to new customers and to service some existing ones. (Toshiba’s sales are about 50% direct, and 50% through dealers.) Toshiba’s approach is therefore different from the other large Japanese and Korean AV/digital signage hardware manufactures– who are hardware vendors primarily if not exclusively. What I found refreshing was Toshiba’s forthrightness about their model. And it’s no mystery why any large player in this space would want to be more focused on managed services and turn key digital signage offerings, given the scary nature of shrinking margins for displays. Toshiba said at the LEAD conference last week that they are particularly focusing on the Sports, Schools, and Retail and Grocery markets for growth– and are keen on enlisting the pro AV channel to co-market services there.

Toshiba’s digital signage offerings are centered around two platforms: Virtuoso, and Experience Manager. Virtuoso was introduced last year, and is a touch-screen display and enclosure for wayfinding or any kind of interactive digital signage function, with Experience Manager as the cloud-based CMS. Both Experience Manager and Virtuosos are part of Toshiba's Ellumina Digital Signage services– Toshiba’s offering that allows a Toshiba team to work with the end user (or through an AV integrator) to manage ongoing content for indoor and outdoor digital displays, video walls, interactive touch panels and QSR menu boards.