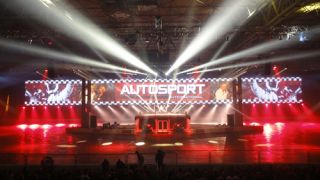 The Live Action Arena stages live racing demonstrations and stunt shows every day for the duration of the racing-themed show, which is named after the UK’s most popular weekly auto racing magazine.

As well as the IMAG feeds shown on the screens, XL Events worked with Video Designer Colin Rozee from ZEEFX Motion Graphics Studio who created all the content for the screen.

XL’s chief projectionist for the Autosport show was Chris Johnson, and their Project Manager was Phil Smith.

In addition to the projection, XL Events provided backstage and dressing room monitoring via a combination of LCD displays and 65” Plasma screens, which allowed presenters and crew to follow the show.