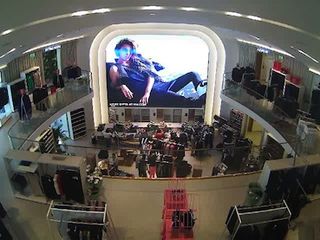 There’s a Spyder inside the flagship Miami store of fashion retailer H&M (Hennes & Mauritz) and no one is complaining. Vista Systems’ Spyder X20 is a key component in the huge LED wall control system that’s capturing shoppers’ attention in the new 26,000-square foot store on Lincoln Road in South Beach, one of the largest of the 259 H&M stores nationwide.