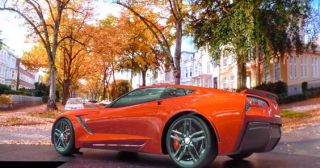 For the past couple of InfoComm shows, one of the more intriguing trends on view has been pixel mapping, also called 3D projection mapping. Of course, this is not just for trade show demos. Projection mapping can be seen at very high end outdoor events, where for example the entire side of a large building becomes a screen, or for creating "virtual sets" on a stage or in a trade show booth. But don’t think that someone is just pointing a high lumen video projector at a building or a set. We’re talking here about getting the pixels to literally “map” every nuance of the surface of the object– skyscraper, or scenic elements flown onto a stage or booth. In other words, the focal plane is not constant but mirrors the changing shape of the surface. And even better, the projector knows the surface changes and software can throw custom content, at the appropriate luminance and focus, onto different parts of the surface, on demand. The effect is stunning.

Back to InfoComm– you’ll see this kind of technology at various booths (Barco, Digital Projection, Dataton, and more.) One booth were you see a nice “set” scaled down demo the various aspects of 3D projection mapping is the Christie booth. Last year, they had a set where an Audi sports car– at about 1/20th scale– sat in a simple half-cube about 8 feet wide. The set came alive when a completely virtual set of images kicked in. The set is back at the Christie booth at InfoComm this year, but with a twist. OK, the car is not an Audi, it’s now a Corvette. But more to the point, the virtual scenery and pixel mapping is ramped up and more interactive.

The set has both the floor, or ground, and the background made with Christie MicroTiles.

And the model Corvette, about a two feet long, is an actual 3D model (solid white) onto

You just have to see it. The car can be “designed” by the user with different color schemes, features, wheels, and more. The car then sits or drives through different scenes.

The set has both the floor, or ground, and the background made with Christie MicroTiles. And the model Corvette, about a two feet long, is an actual 3D model (solid white) onto which 3 Christie DLP projectors project the car’s color, features, etc.

The software that runs this demo is from Ventuz. Erik Beauont from Ventuz was on hand at the set at the Christie booth when I was there (he normally hangs out in the 3 Monkies booth at InfoComm). Ventuz is more active now in the high end staging world… they have already had lots of success with Fox Sports, for Microsoft live events, with big events with WorldStage, and more.

Here, the Ventuz software is the authoring tool. A 3D model is created, in a way that the background, the car, and the floor, are all “talking to each other”. What’s different this year is that it’s all interactive. The user can use a touch screen to manipulate it all in real time.

Not the biggest pixel mapping “set” at InfoComm… but a really nice one, that by scaling down for a demo lets you get hands on.