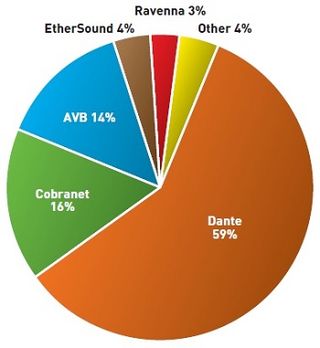 Which protocol is currently most popular? During May and June, SCN, our European sister title Installation, and publications in the Middle East and Asia, asked their readers to complete an online survey on audio networking. The results of this comprehensive and truly worldwide survey are now in.

The survey was open to all. In particular we wanted to hear from people who don’t use audio networking technology, and there was a good response from this section of the SCN readership. Inevitably though, the majority of responses came from people who already use this technology, so that needs to be taken in consideration when reading some of the answers.

The purpose of the survey was to try to find out how much audio networking is going on and what choices people are making. In general we were looking at the “big five” industry protocols, as well as seeing how much use there was of proprietary ones. When asking which protocol they thought was the most popular, there was a clear leader in Dante, with CobraNet in a distant second place, closely followed by AVB. Anecdotally, it’s probably likely that there are still more CobraNet installations out there, simply because it is the oldest, but you will read that newer protocols are now used more often.

Top 3 reasons why you use a specific protocolTrends in networking

We asked how much of people’s work involved networking in the past 12 months and how much would use it in the next 12. Notably, 23 percent had not used networking in the past year, and only two percent expect not to use it in the next 12 months. What’s more, nearly 40 percent think that networking will be used in more than half of their work. This shows a significant growth in the use of the technology.

In order to find out which protocols people have used and will use, we asked about previous and future use of protocols. Our respondents had completed more than 6,000 networked projects in the last year but expect to carry out more than 9,000 in the next—a significant leap.

What percentage of projects use audio networking?

How many times have/will you use audio networking?Asking why

We wanted to know what thought process people went through when choosing which protocol to use, and also would make the switch from one protocol to another. The top three reasons for choosing a specific protocol are: wanting a wide selection of products, interoperability, and confidence that the protocol will be around in the future.

When it came to reasons for switching protocols, the same three answers came top, with a very similar distribution. We asked people for comments and only one person mentioned that they would not use a proprietary protocol. While standards are good, it seems that simply being based on standards is not the criteria; most people just want to get the job done.

Where is networking being used?

It seems that audio networking is used everywhere, but about one third of all networked projects are conferencing and AV applications.

We stated in the beginning that we wanted to hear from people who were not currently using this technology. If they were to use it, which protocol would they most likely choose?

Overall user satisfaction per protocol We also wanted to know what would make them switch from analogue to networked audio. Client request would be the primary driver (21 percent) but there seems to be a slight fear of networking from potential users, with requests for education on benefits (from 17 percent), for it to be easier or quicker (16 percent), and for training (from 12 percent).

Looking to the future

Finally, we asked people to peer into their crystal balls and to predict the future for each protocol. There were only two protocols where the number of respondents expecting an increase outweighed those who thought the opposite: AVB and Dante. The use of proprietary protocols was expected to be about the same.

We were impressed with the number of responses—more than 600. What was also clear from reading the many comments was that almost all the responses were from normal working professionals.

Networked project sector breakdown: USA Few people appeared to have an axe to grind on the subject, or unwavering loyalty to a particular way of doing things; most were simply trying to get the job done with the equipment the industry provides. The data bodes well for the future of audio networking, with a massive predicted increase in use.

AVB had a mixed response, and from the comments it appeared that the majority of AVB users were Biamp users. This raises the question as to whether people are using AVB because they want to use Biamp, or whether Biamp’s use of AVB helps make their product work better.

Dante leads by every metric. This is borne out by users wanting a variety of product and the fact that there are many more Dante products available than anything else. Their user satisfaction is higher, and also, the data shows that users of Dante use networking technology more often than other protocol users.

Our thanks to Audinate for sponsoring this survey.