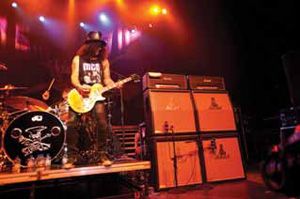 NILES, IL—The 2010 touring season has been a busy one for rock icon Slash, who hit the road for tours of Europe, Asia, and the U.S. in support of his eponymous solo album. After a successful world tour through Asia and Europe in support of the album, Slash began his highly anticipated U.S. dates in August.

Veteran independent engineer Monty Carlo from the sound company Audio Analysts handled monitor mixing for the tour’s U.S. leg. Carlo, who is also president/ founder of Book of Lies, a tour itinerary provider. He notes, “It’s basically an all-Shure stage, because Slash is a Shure endorser,” he notes, “and frankly, that makes my job a lot easier.”

Slash on tour with all Shure gear, including wired and wireless mics.

Of course, Slash is best known for his distinctive guitar tone. Like many guitarists, Slash sticks with the tools that helped him make his name, maintaining a hardwired connection to his custom Marshall rig, which is miked with a pair of Shure ribbon microphones. “The KSM313 is very sonically neutral,” says Carlo. “What I like about these mics is that they sound like the guitar. It allows me to replicate the tone of Slash’s cabinets with virtually no EQ, typically just hi- and lo-pass filters. We’re using the front side of the 313 for the fuller, warmer sound.” The band’s other two guitars are miked with Shure’s SM27 condenser mics on the cabinets. In the final mix, all guitar mics are combined with a Palmer PDI-09 direct box.

Myles Kennedy, who uses a Shure UHF-R wireless system with Beta 58A capsule, handles lead vocals for Slash’s touring band. Backing vocals are hardwired SM58s. The only other wireless systems in use on stage are a pair of PSM900 personal monitors, used by Kennedy and bassist Todd Kerns. Monitor mixer Monty Carlo and guitar tech Chet Huan wear them as well.

“Shure has a fantastic handle on RF these days. I’ve been a big fan of the UHF-R system ever since it came out, and now the PSM 900 has really taken in-ears to the next level,” says Monty. “It sounds fantastic, and it’s clearly been designed to make life easy for monitor engineers.”

After an end-of-year break, Slash will hit the road again in 2011, starting with U.S. dates in January and February.