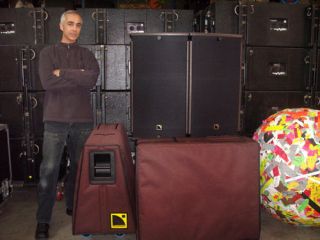 Bill Carrico with Sound On Stage’s new ARCS II enclosuresTaking delivery of four ARCS II in early December, SOS had the new enclosures in its shop for barely a day before sending them into duty on a series of events by the San Francisco Symphony at Davies Symphony Hall. The ARCS II served as orchestra sidefills complementing a dV-DOSC/dV-SUB house system for both the symphony’s annual “Colors of Christmas” concerts and huge 100th anniversary opening night gala performance.

According to 10-year SOS Staff Engineer and Account Manager Bill Carrico, the ARCS II were purchased because the sound reinforcement provider simply needed more than its current inventory of ARCS to keep up with an increasingly busy roster of productions.

“We purchased our ARCS II systems without even hearing them based on the description of the product and our experience with the original ARCS,” says Carrico. “ARCS has been such a fantastic speaker for us to begin with, we knew that ARCS II just had to be more than fantastic, and it really is. We’ve been very happy with the new ones so far and look forward to increasing our inventory of them and other L-ACOUSTICS products in the new year.”