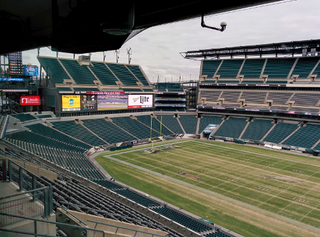 Spyder's content delivery system used in the large professional displays at Lincoln Financial Field
“Vista Systems’ Spyder is used in large professional projects with displays over 1080p or with displays requiring multiple windows,” says Greg Stocker, managing director of the sports division of Click Effects. “We’ve worked on nearly a dozen projects in the past few years – all using Spyder, in conjunction with our Crossfire and Blaze video playback systems, to facilitate a level of visual sophistication that fans are accustomed to seeing on broadcast television.”

“We have more than 30 content delivery systems playing audio, video, graphics and data over all of the LED displays, digital signage and ancillary displays,” says Stocker. “If you include suite and concourse monitors there are over 1,000 displays.”

“Spyder enables users to put multiple sources over the huge displays in one canvas,” Stocker explains. “It also facilitates synchronous playback, including on suite and concourse displays, to completely envelop fans in ‘moments of exclusivity,’ such as a touchdown. And it’s all done with very smooth transitions and production values that approximate what fans see on the broadcast networks.”

This fall at LSU’s Tiger Stadium in Baton Rouge a single Spyder X20 1608 is working in combination with more than ten Crossfire and Blaze systems to drive the big LED display.