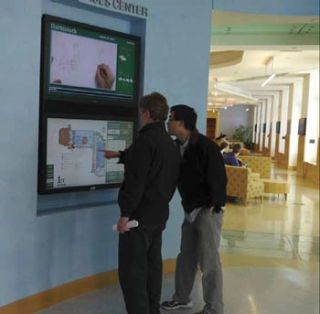 Designing the Right Message For Success

In digital signage systems, to quote a phrase popularized by Bill Gates, content is king. The technology is important, but ultimately it’s just a mechanism allowing the client to deliver their message.

When designing a digital signage system, said Chris Colt, director of digital signage sales for the Americas at Haivision, “The key challenge is to define what’s on the screen, why, and how often it’s refreshed. That’s really what signage is about—the right message, the right person, at the right time.”

Jay Martin, director of U.S. sales at X2O Media, agreed: “Where’s your content plan? What type of information are you trying to disseminate? What is your target audience?”

Then, how do you best reach that audience? “All the other decisions flow from that,” he said.

The bottom line is also critical, of course. “Especially with the economy still recovering, the key thing is cost,” said Jeff Hastings, CEO of BrightSign, a company founded by Anthony Wood, inventor of the DVR and CEO of Roku.

“From the CEO down, they have two basic questions: Is it going to save me money or is it going to make me money?” commented Martin. “Either you’re making the communication process more efficient, so you’re saving money, or you’re doing some sort of revenue generation scheme like ad placement, or an ad-supported network in the retail world, or you’re generating increased business by using a digital signage network.”

Quantifying ROI may be difficult, noted Colt. “Sometimes the ROI isn’t necessarily a financial result. Sometimes it’s cutting down wait time, making it more of an interactive experience for the customer, or training.”

“Two things stand out in terms of delivering something that’s really going to work,” said Sean Matthews, president of Visix, which focuses primarily on institutional communications environments. “Number one is screen saturation. If you’re looking for strong, robust employee communications, for example, you need enough saturation to reach that audience, in lobbies, break rooms, elevators.”

The second thing is network access: “It’s very difficult to keep the content fresh and up to date and lively enough to keep a passing employee audience engaged.”

CubeSmart, a storage facility operator across the country, will be using BrightSign Integration work done by Flixio.

Planning for content updates is frequently overlooked, observed Hastings. “When they put the costs together, they look at the hard costs, but they forget the soft costs. You can build new content, or you can keep it fresh with new content from a connected network.”

That might include RSS feeds or dynamic web content, for example, or interactive elements such as SMS texts. But not every client has or will allow web access from the digital signage system.

“A lot of retailers won’t allow vendors to get onto the network,” said Matthews. “The only option is some sort of cellular-based plan, but those are incredibly expensive.”

“We can feed screens just as effectively over a 3G or 4G network as we can on a wireless or wired LAN,” said Martin.

Where there is no network, and thus no monitoring, the system needs to be robust and self-sufficient, said Hastings. In one retail example where the screen power switch was exposed, “We used HDMI CEC commands to continuously send power to the TV.”

Where network access is practicable, however, a client can reduce content creation costs by linking to portions of the company’s website, say, or automatically pulling preexisting content from a server. That can also reduce human error, said Martin. “When you automatically pull the information from an existing data source, like SharePoint, Exchange, or SQL , it’s already there and vetted.”

If server hardware is a budget-buster, clients can take advantage of low-cost hosting services, such as the $100-per-year cloud-based service offered by BrightSign, said Hastings. “They’re able to take their networked devices and download the content from these super-low-cost services. It allows you to build a network system where you don’t have to pay, or you’re paying minimally, for content storage.”

Smart handheld devices have brought a new level of sophistication and expectation to the general public. “The public is driving the digital signage industry very effectively to be more real time and more interactive. The old days of the 20-minute loop playing over and over in a doctor’s office is not acceptable anymore,” said Martin.

Some designers are eschewing the old paradigms with eye-catching video walls or projection onto glass. The technology is already available to support even the wildest designs—the stumbling block is the cost.

The ability to draw from external data has become a critical component of signage design. Even wayfinding screens need access to a database of people and locations. “A lot of products have APIs, but someone has to make these pieces work together,” said Sean Matthews, president of Visix. “That’s where the integrator has a crucial, crucial role. If the vendor is not prepared to write code to make these things talk together or perform in a way that the client would like, then the integrator is going to have to either find that talent within or outsource putting those pieces together.”